Man Utd staged another away day comeback in winning 3-1 at West Ham United in the Premier League. Manchester United came from behind to se...

Man Utd staged another away day comeback in winning 3-1 at West Ham United in the Premier League.

Manchester United sealed yet another away day comeback at West Ham on Saturday night.

The Red Devils were a goal down at the break but stormed back after the restart to claim all three points.

Three goals inside 13 minutes flipped the game on its head, with Paul Pogba, Mason Greenwood and Marcus Rashford all netting with fine efforts.

After a troublesome first half there was clear delight at going in front - for two United players in particular.

Eagle-eyed fans noticed the reaction of Bruno Fernandes and Alex Telles after Greenwood propelled United ahead at the London Stadium.

The youngster lashed home a superb half-volley and upon it rippling the net the celebrations from Fernandes and Telles said it all.

Telles took a throw and played a one-two with Fernandes before whipping the ball into Greenwood, who applied the finish.

Fernandes was on the edge of the box and punched the air with joy as soon as Greenwood's effort flew in.

As for Telles, he sunk to one knee in delight.

The celebrations show camaraderie within the United camp right now.

For the fifth successive Premier League away game United conceded first but they bounced back, just as they did at Southampton the week before.

Next up for Solskjaer's side is a crucial Champions League meeting with RB Leipzig on Tuesday. 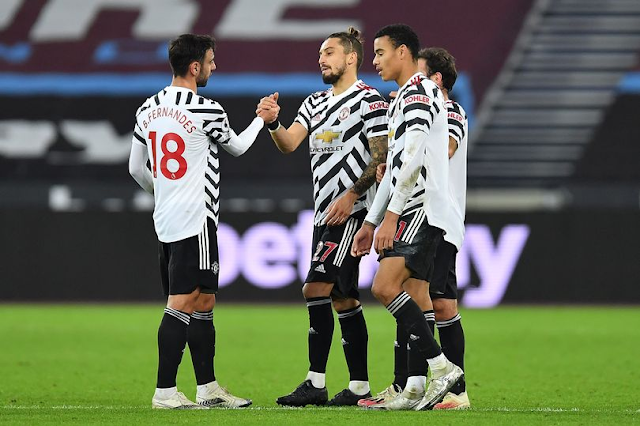