The striker could be in contention to feature vs Leeds United as Man Utd look to continue their good Premier League form. Manchester Unite... 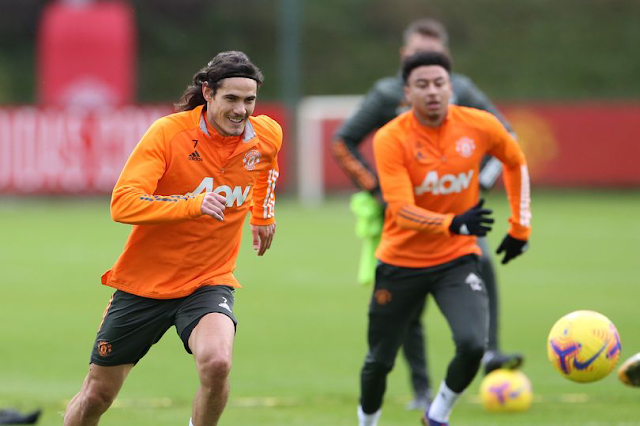 The striker could be in contention to feature vs Leeds United as Man Utd look to continue their good Premier League form.

Manchester United could have Edinson Cavani back in their matchday squad to face Leeds United this weekend after training in full.

United host Leeds on Sunday afternoon at Old Trafford, in the first league meeting of the trans-Pennine rivals since the Yorkshire club's promotion back to the top flight.

Cavani missed the recent United games against RB Leipzig, Man City and Sheffield United with a groin issue, and Ole Gunnar Solskjaer said the striker was focussed on his fitness. The Uruguayan has recently been hit with an FA charge over bringing the game into disrepute for an allegedly racist or offensive social media post.

He could be hit with a ban, but was pictured training outdoors at United's Carrington base on Saturday on the eve of the Leeds game. A small group of United players, also including Donny van de Beek, Bruno Fernandes, Alex Telles and Fred trained under the watchful eye of Solskjaer. The United boss may well make changes to his side following the 3-2 win at Bramall Lane on Thursday night.

Speaking in his press conference about Cavani, Solskjaer said: "He’s apologised, he hopes his mistake isn’t going to be costly and he’s still working on fitness.

"He’s very meticulous in his rehab work and has not felt right. He couldn’t play this game so let’s see how he feels in the last training session. It’s a muscle injury that he felt in his groin."

United teammate Mason Greenwood recently spoke about Cavani and how the 33-year-old is helping younger players behind the scenes.

Manchester United got back to winning ways against lowly Sheffield United and now aim for a similar result against cross-Pennine rivals Leeds United.

The bitter rivalry with Leeds renews at Old Trafford on Sunday, with Marcelo Bielsa's intense style of play offering a big challenge to Ole Gunnar Solskjaer's hopes of his team mounting a genuine challenge for the Premier League title.