Marcus Rashford: Manchester United striker says he can only see himself at the club

Man Utd forward Marcus Rashford wins Sport for Social Change award at British Sports Awards for campaign against child poverty; "The bond that I have with United is much greater than just these last five years, and it will forever be greater than my actual career" 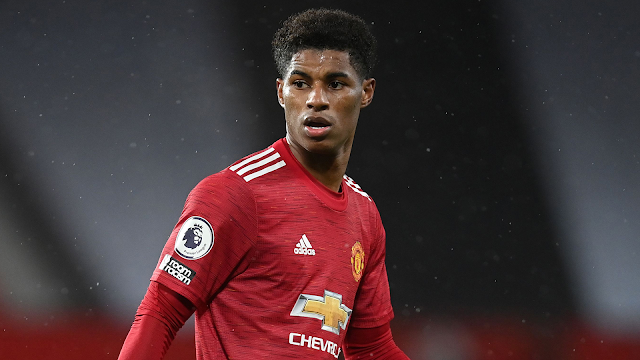 Marcus Rashford says he can only see himself playing for Manchester United as it "wouldn't sit right" for him to wear another club's shirt.

The 23-year-old United academy product has blossomed into one of the Premier League's most exciting players ever since bursting onto the scene in 2016, and says he only sees his long-term future at Old Trafford.

"I just want to do the best I can for the club whilst I'm here, so hopefully I'm here for the long term."

Rashford was speaking after being announced as one of the winners of the Sport for Social Change award, part of the British Sports Awards held by the Sports Journalists' Association, while also coming runner-up to Lewis Hamilton in the Sportsman of the Year award.

The England forward has been recognised for his activism on child poverty and hunger, starting a campaign to deliver free school meals to children outside of term time, twice forcing a government U-turn on the matter in a move which saw him being awarded an MBE in October.

He said his bond with Manchester United will be "greater" than his footballing career as the club gave him the perfect platform to shine from the very first day at the club as a young schoolkid.

"All the good things that have happened this year it's come from Manchester United giving me the opportunity as a kid," he said.

"I don't just remember the last year or the last five years, I'm talking about the times when nobody in my family drove and I had to get to training, and United had people to come and take me to the training ground and take me back home.

"When I was six, seven, eight years old, I'm talking about the times when they put me into accommodation when my mum was struggling at home, when I was 11 years old and I was up there until I was 16, 17, so it's a lot deeper than what people see sometimes.

"I think people only see some of the stuff that's been happening since I've been in the first team, but the bond that I have with United is much greater than just these last five years, and it will forever be greater than my actual career.

"They're the reason that I've become a footballer, they've given me an opportunity to express myself and find out that I had talent in football."