MATIC: WHY WE WERE FANTASTIC AGAINST EVERTON

Nemanja Matic says that Manchester United are playing their best football yet under Ole Gunnar Solskjaer, after the Reds beat Everton 2-0 ... 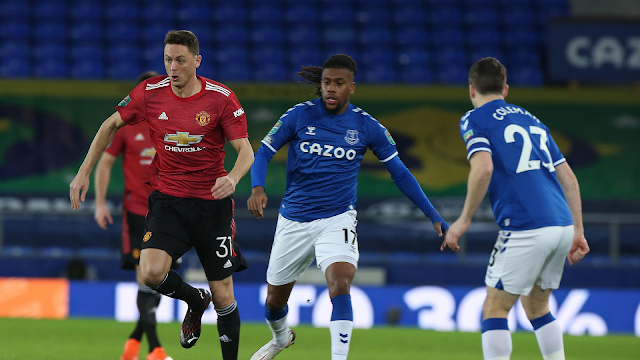 Nemanja Matic says that Manchester United are playing their best football yet under Ole Gunnar Solskjaer, after the Reds beat Everton 2-0 to reach the Carabao Cup semi-finals.

Late goals from Edinson Cavani and Anthony Martial did the damage on Merseyside, but what pleased Matic most was the team’s almost complete control of the game.

Many of our wins away from home this term have been achieved after going a goal down, but here the Reds never gave the hosts an inch.

“I'm very happy with our performance,” admitted the midfielder. “I think that everyone who supports Manchester United is happy, because to come here to Goodison Park, it's not easy to control 90 minutes, and I think we did it tonight.

“It was everything about us. We didn't allow them to create a lot of chances. So I think that we absolutely deserve to be in the semi-finals, and with some fantastic football also. We scored two goals, we created a lot of chances. I'm happy with everything that we saw in our team.”

United flew out of the traps at Goodison Park – much as the Reds did during last weekend’s thumping 6-2 win over Leeds – but didn’t strike until the 88th minute, despite an extremely dominant opening half an hour. However, the Serbian was impressed that his team-mates didn’t let the focus slip and eventually pounced.

“Was it frustrating we hadn't scored before half-time? Yes, especially after the first 10-15 minutes. We had a lot of chances. We hit the post, some the keeper saved, but that's football. Sometimes you score, sometimes not, but the most important thing was that we kept that level of football for 90 minutes. We controlled the game and, at the end, the most important thing is [that we are in the] semi-finals.

“Tonight everyone did a great job. 'm happy with everyone who played tonight. Let's keep this momentum and this level of football.”

United will meet our Carabao Cup conquerors of last season, Manchester City, in the next round but Matic thinks the squad is well positioned to go one step further in 2021.

“This time I hope we will use our chance; we will do our best,” enthused the 32-year-old, who scored in the second leg of last term’s semi-final with the Blues.

“I think that we are now in a better condition, a better moment. We play better football than last year, in my opinion. I'm very confident.”