Manchester United’s time in this season’s Champions League came to an end after suffering a 3-2 defeat at the hands of RB Leipzig in Germa... 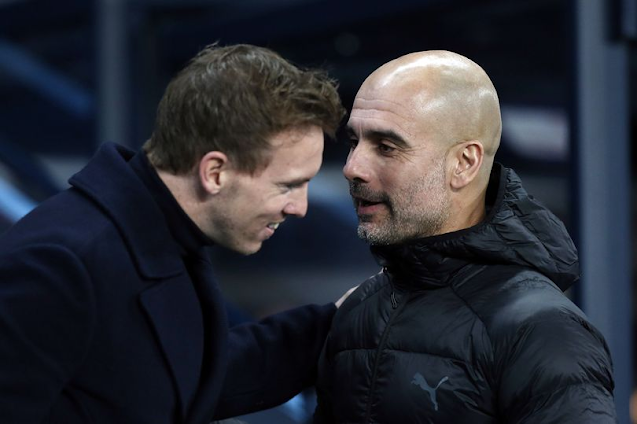 Manchester United’s time in this season’s Champions League came to an end after suffering a 3-2 defeat at the hands of RB Leipzig in Germany this month.

The Red Devils were pitted in a group with the Bundesliga side, Paris Saint-Germain and İstanbul Başakşehir.

After winning the first two matches against PSG in Paris and Leipzig at Old Trafford, Ole Gunnar Solskjaer’s side were favourites to progress to the next round.

However, Manchester United made it hard for themselves by losing three of the next four matches, including a defeat against İstanbul Başakşehir in Turkey and a 3-1 loss to the Ligue 1 winners at home.

This week’s edition of SportBild has an interview with Leipzig manager Julian Nagelsmann, where he said he wants to treat other coaches equally and also talks about a visit from Manchester City manager Pep Guardiola before they faced the Red Devils in England.

“I always want to treat everyone equally. But of course, it’s different when you meet a colleague for the first time than when you see each other for the sixth time in the Bundesliga,” he said.

“Five or six years ago I followed Simeone or Mourinho on TV and saw them win titles. When they stand next to me, I look forward to these meetings. I try to learn from how they treat you.

“I think it’s noble when coaches are above things. A lot can happen during the games. But I am impressed by the Grand Seigneur category, who are always friendly and honestly mean praise and consolation. Pep Guardiola has this charisma.

“When we played against Manchester United [in Manchester], he came up to us on his day off to say hello. That is very appreciative.”

There’s no mention whether or not the Manchester City manager offered any insights to the German coach. Even if Guardiola did, it was of no help as Leipzig suffered a crushing 5-0 defeat at Old Trafford in October.

Leipzig, however, were successful in avenging this loss by knocking United out of the competition in December.