OPINION: Donny van de Beek has to do what other Manchester United midfielders have done vs Everton

Man Utd face Everton in the Carabao Cup quarter-finals tonight and Donny van de Beek is set to be given an opportunity to impress. Van de ... 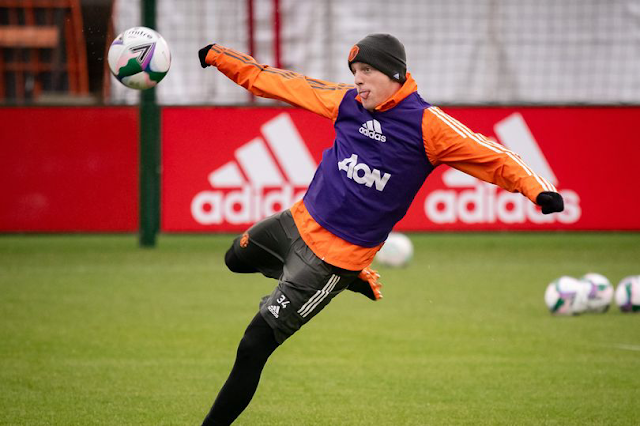 Man Utd face Everton in the Carabao Cup quarter-finals tonight and Donny van de Beek is set to be given an opportunity to impress.

Van de Beek has to impress

The Manchester United midfield has been in fine form against Sheffield United and Leeds, with five of the six regular options available to Ole Gunnar Solskjaer starting at least one of the games and playing well.

The odd man out has been Donny van de Beek, with the £35million summer signing afforded 10 minutes against the Blades and another 19 at the weekend.

It's not been the start to his Old Trafford career that the 23-year-old would have expected after moving from Ajax. After scoring on his debut against Crystal Palace he would probably have imagined he'd be making more of an impact by now.

With the deeper midfield roles seemingly sealed off to him right now, Van de Beek has to make do with a role as back-up to Fernandes, but in the knowledge that he is virtually irreplaceable in the biggest games.

That makes every opportunity Van de Beek gets a big one and he will surely start against Everton, with Fernandes due a rest. The Holland international could do with reminding everyone of his own qualities.

Getting the balance right

Solskjaer had probably already made his mind up on his team for tonight but hearing opposite number Carlo Ancelotti say he planned to play his strongest side might have made him rethink.

Everton have been in good form recently and they will be eyeing this as an opportunity to reach a semi-final. Ancelotti played a very strong side in a win against West Ham in the previous round.

But United's European commitments mean they have played more football than the Toffees this season and they have other targets as well, such as sustaining an unlikely title challenge.

A win tonight will send United into the semi-finals of a cup competition for the fourth time under Solskjaer and maintain an impressive run of consistency in knockout competitions.

The Champions League may not have gone to plan this season, but United will be in contention for the Europa League in 2021 and under Solskjaer they continue to put themselves in the running for silverware.

The next step has to be to reach a final and lift a trophy. For a young side it would be a major staging post in their development and for Solskjaer it would be a boost to his CV and silence some of the doubters. This competition looks as good a bet as any this season.

How long United will have Edinson Cavani available for again remains uncertain, with a Football Association charge and a potential three-game ban hanging over him, but for now it would make sense to start him at Goodison.

This is where he scored his first goal for United and he kicked on from there with that double against Southampton, but he's had a minor injury recently and returned for the final 19 minutes at the weekend.

The 33-year-old is a supreme centre forward and starting him in this quarter-final will allow Anthony Martial to be rested ahead of the vital Boxing Day clash with Leicester City.

A changing of the guard

It could be a final farewell for one United player at Goodison Park and the start of a new chapter for another. Solskjaer has hinted that Jesse Lingard will be in the squad to face Everton and he could make just his third appearance of the season, having not featured since the third round of the Carabao Cup in September.

If Lingard does play it might be his 210th and final appearance for the club, with a move away in January a serious possibility, If that's the end of an era it could be the beginning of a new one if Facundo Pellistri is involved.

The teenage winger has made a strong impression with the Under-23s recently and now they have a long pause between fixtures the Uruguayan could be training with the senior side.

Having been on the bench for two Champions League games he might well be among the replacements again tonight. A debut would signal the start of his true Old Trafford career.