Paul Pogba finally addressed his future but it's difficult to believe he is fully committed to the Man Utd cause after leaving it so l...

Paul Pogba finally addressed his future but it's difficult to believe he is fully committed to the Man Utd cause after leaving it so long to address Mino Raiola's comments.

It only took five days but Paul Pogba finally addressed his future at Manchester United on Saturday night.

"1,000 per cent involved," is what supporters are expected to believe — and perhaps they might've done, had Pogba's statement been issued on Monday night — but it's difficult to see how they can believe him after he allowed his voluble agent to disrupt United's season at the worst possible time.

Ole Gunnar Solskjaer refused to accept Mino Raiola's interview with Turin media had any bearing on United's Champions League exit in Germany but the Italian's claim that Pogba's United career was 'over' and that he wanted to engineer his client a move away in January was undeniably a distraction.

It's not a stretch to say United might still be in the Champions League had Pogba not 'shut his agent up', as Paul Scholes suggested might be the best course of action, before kick-off in Leipzig. But he didn't, and United will resume their continental campaign in the Europa League in the new year.

Pogba remained silent after Tuesday's loss, a game he influenced off the bench but might've started after scoring against West Ham had Raiola kept schtum. The Tuttosport interview was actually conducted before United's comeback at the London Stadium but the damage had been done — Raiola's comments were always going to emerge.

Solskjaer was adamant it had already been decided that Scott McTominay and Nemanja Matic would partner each other for the Group H decider but that axis was as effective as you'd expect it to be and Pogba's quality was missed up until his introduction.

Pogba wants to leave United, that much is clear, and that has been the case for upwards of two years. His statement on Instagram, conveniently released minutes after Sky Sports' Saturday Night Football broadcast had ended, won't kid the majority of supporters.

Roy Keane was critical of Pogba's performance against City: "You keep saying he's talented but that's not good without desire or work rate. The guy doesn't want to run." Keane would've had a field day had Kelly Cates read out Pogba's words before close of play.

Pogba's other act on Instagram after the derby was to defend his agent after Raiola had called out the German outlet Bild over a story published earlier in the week. Bild had claimed Pogba would consider finding a new agent if Raiola failed to find him a new club.

Raiola's post read: "Like always, the Bild doesn't disappoint! Amazing how fake news spread around." Pogba was tagged in Raiola's posts and commented on Instagram: "When you don't know you don't talk @bild."

Pogba wasn't quite so keen to tell Raiola not to talk. 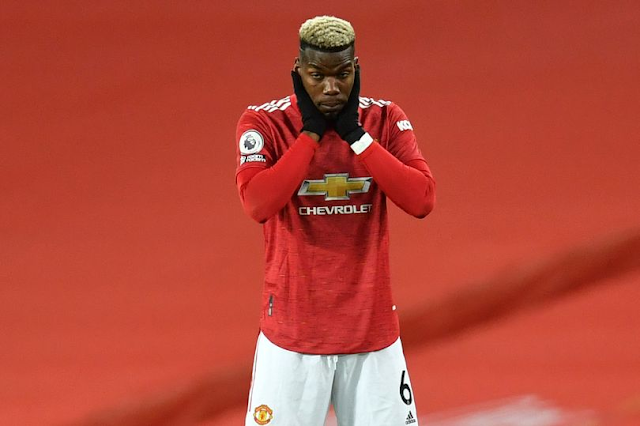