Fred was sent off in the second half of Manchester United's defeat by PSG after being shown a second yellow card. Paul Scholes says he... 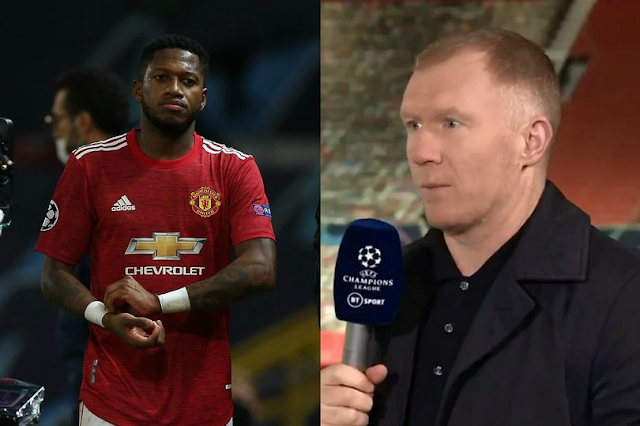 Fred was sent off in the second half of Manchester United's defeat by PSG after being shown a second yellow card.

Paul Scholes says he understands why Ole Gunnar Solskjaer did not substitute Fred prior to the midfielder's red card against PSG because Manchester United were playing excellently with him in the side.

The Brazilian was the subject of controversy in the first half when he moved his head towards Leandro Paredes, with the referee only opting to brandish a yellow card after being prompted to watch a replay of the incident on the pitchside monitor.

Yet Solskjaer kept Fred on the pitch and the 27-year-old eventually saw red after the break for what was a fair tackle on former United midfielder Ander Herrera.

Speaking on BT Sport, Scholes said that he could understand why Fred was kept on the pitch on the strength of United's first-half performance.

He said: "In hindsight, he probably should have been [taken off]. I can understand why Ole hasn't taken him off, in the last 35 minutes of that first half United were excellent. They were really controlling the game and I think Ole will be really happy with the performance, I thought they were excellent."

Scholes added: "Fred really should know that any other tackle he's going to make, the ref will be ready to send him off. He's unlucky as he gets the ball first but the referee's waiting for him to do it."

Rio Ferdinand agreed that Fred was walking a tightrope while on a yellow card and speculated he may have been moments away from being replaced when the red happened.

He said: "Van de Beek was changed and we were sitting here wondering whether Ole was waiting for next time the ball went off to get him on.

"Fred was toeing that line and he'd lost a bit of control, you see those positions where you're thinking the ref has given you one or two free chances and you should calm yourself down."