Pogba has had an impressive December but is still not a guaranteed starter for Man Utd. Paul Scholes says Manchester United have shown that ... 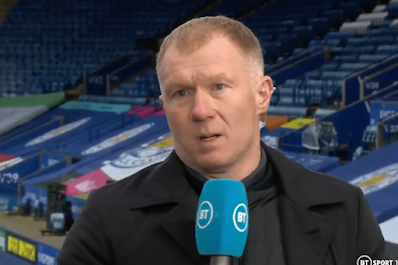 Pogba has had an impressive December but is still not a guaranteed starter for Man Utd.

Paul Scholes says Manchester United have shown that Paul Pogba and Bruno Fernandes can play together.

Pogba has been in impressive form in December, which has reignited hopes from last season that he can form a good partnership with Fernandes.

Yet with Scott McTominay putting in a man-of-the-match performance in last weekend's victory over Leeds United and Fred also in good form, there is plenty of competition for places in Ole Gunnar Solskjaer's midfield.

Speaking on BT Sport, Scholes said that United need to ensure that the two players operating behind Fernandes are able to control the ball.

"I think a 4-2-1-3 suits United down to the ground," he said. "There was a period last season after the lockdown where, before the FA Cup semi-final, they played five games in a row where they didn't change the team, Pogba was playing in midfield with Matic and Fernades ahead of them. They won every game and looked sensational.

"That's where you got a little bit excited about this season but then all of a sudden they had this really bad start. This last couple of weeks, Ole seems to have gone back to that. Pogba and Fernandes played against Sheffield United and they were both very good.

"They can obviously play together, of course they can, good players can always play together. I think, if Ole can stick with that formation, I just love the 4-2-1-3, I think it's perfect for what United have got."

He added: "The big question is the two in midfield. When it's Fred and McTominay, they can be very similar players. I know Scott scored a couple of goals against Leeds and looked very good but can he do that over a season? I'm not sure.

"Do they need someone with a bit more quality in there like a Pogba? With Fernandes, the two players in behind him are very important, they need to be the ones who get control of the game and then bring a No. 10 into play. If they can get that, there's real quality there."

With United one of the form teams in England since Fernandes' arrival in January, Scholes says the Portuguese star has completely transformed his former side.

"Before he came, United could hardly create a chance. Then all of a sudden, he comes into the team, they look like they're going to score three or four every game.

"He's had such an influence. He looks like a great leader as well. I don't think he's a great speaker or a cajoler like Tony Adams, Martin Keown or Roy Keane, I don't think he's that type, but he leads by example. Some of the quality he has shown has been sensational."

He added: "It's his quality. It's one thing to see passes, but he's capable of playing them. What I like is that they're winning lots of games but he wants to win trophies and that's what being at Manchester United's all about. He's desperate to do that. He's got three really good forward players in front of him and he can feed them."