David de Gea and Bruno Fernandes are set to return but Edinson Cavani will miss out when Manchester United face RB Leipzig on Tuesday. Man... 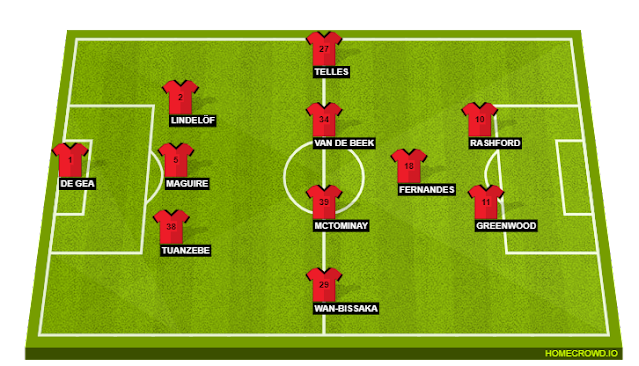 David de Gea and Bruno Fernandes are set to return but Edinson Cavani will miss out when Manchester United face RB Leipzig on Tuesday.

Manchester United will hope to book their place in the UEFA Champions League Round of 16 when they lock horns with RB Leipzig at the Red Bull Arena on Tuesday night. And, Ole Gunnar Solskjaer has some fresh roster issues to deal with ahead of his side’s latest fixture.

Speaking to MUTV ahead of the game, Solskjaer provided an update pertaining to de Gea, Shaw, Martial and Cavani. The Manchester United boss said, “David is back again. Luke will be travelling with us. Anthony and Edinson, they had minor things, but they won’t make the trip, no.”

With de Gea available, it is likely that Dean Henderson will make way for the Spaniard between the sticks. In front of de Gea, Manchester United are likely to line up in a 3-4-1-2 formation against RB Leipzig, warranted by the absence of Fred, Martial and Cavani.

Axel Tuanzebe is available after missing last week’s game against Paris due to a suspension, and the young defender will likely be a part of the three-man central defensive partnership. Tuanzebe will join Victor Lindelof and Manchester United captain Harry Maguire in the back-three.

Up ahead in midfield, Scott McTominay will assume the role usually essayed by Fred, with Donny van de Beek likely to be his partner in the centre of the park. Aaron Wan-Bissaka and Alex Telles ought to be the two wing-backs, with Shaw likely to be given time to build up his sharpness.

Bruno Fernandes and Marcus Rashford are certainties to return to the starting lineup after making a huge difference off the bench this past weekend against West Ham United. They will be joined by Mason Greenwood in the attacking trifecta, with the English duo forming the strike partnership, while Fernandes will reprise the no. 10 role.