Shaw Gets 8, Rashford With 5 | Manchester United Players Rated In Stalemate Vs Manchester City

Manchester United faced off against Manchester City at the Old Trafford hoping to pick up all 3 points which would have sent them into the top four of the Premier League table. Ole made some key changes to his side from the midweek defeat vs RB Leipzig as Pogba and Fred were recalled into the starting line-up.

Neither of the teams looked clinical as the game ended 0-0 and both the parties seem satisfied having shared the points.

Let’s take a look at how each Manchester United player fared during the match against Manchester City.

Wasn’t really tested, however, did well to stop Riyad Mahrez’s shot from close range in the first half.

Redeemed himself after a shambolic performance midweek. Did really well to contain Sterling throughout the game by putting in some really well-timed tackles and blocks.

Kept the entire ‘back-four’ in shape and blocked everything that came his way. Dominated aerially.

Did well to co-ordinate with Maguire and hardly put a foot wrong throughout the game. Made some important clearances for his side.

Ole probably went for Luke Shaw over Alex Telles as he could have wanted more defensive options on the pitch and it paid off as the Englishman outclassed both Riyad Mahrez and Ferran Torres over the ninety minutes.

Looked fairly comfortable at the centre of the park and combined well with McTominay to nullify Kevin De Bruyne’s attacking threats.

Had the attacking intent United needed to push City on the back foot at times. Put in some great through balls.

The Scottish midfielder had a great game alongside Fred as he cut off some crucial passing options time and again. Got better as the game went on.

The Portuguese playmaker had some great ideas in mind but couldn’t implement them. Looked threatening but the Rodri-Fernandinho pair did well to limit his options going forward.

Made a few good runs on the right-hand side of the pitch, but never really looked threatening. Had an okayish game.

The English striker had a quiet game.

The poor run of form continues as the Frenchman struggled to get into the game after being subbed on. 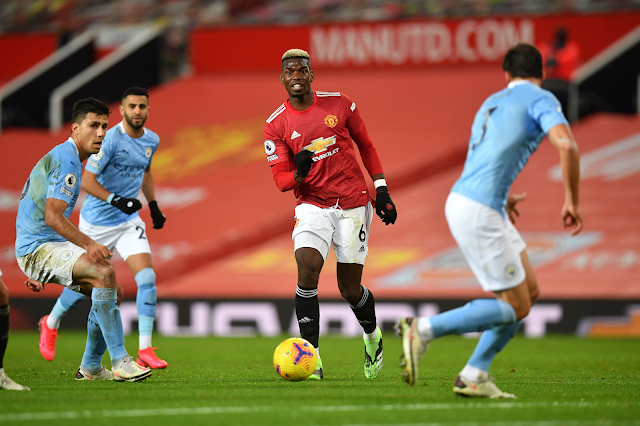