Both Sir Alex Ferguson and Jose Mourinho managed Paul Pogba at Manchester United and both bosses had the pleasure of dealing with his cont... 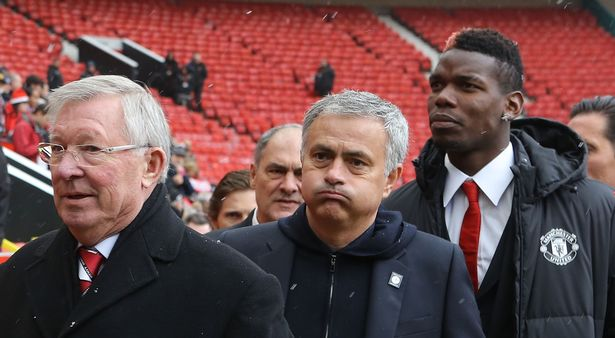 Sir Alex Ferguson and Jose Mourinho didn't always agree on everything when it came to Manchester United.

But it seems Paul Pogba, and the influence of his agent Mino Raiola, is something the two former Red Devils managers certainly agree on.

Raiola upset everyone on the red side of Manchester with his bombshell update on Monday night - the eve of United's Champions League clash with RB Leipzig.

The super agent announced that Pogba is unhappy at United, that his time at the club has come to an end and that he'll likely sign for Juventus, perhaps as soon as January.

The announcement, and its timing, have been widely criticised.

But this isn't the first time the agent has been accused of showing a lack of respect for Man United, nor is it the first time Raiola has put Pogba in an awkward position.

All the way back in 2012, when Pogba was a youngster at United, Raiola orchestrated the Frenchman's move to Juventus.

Then boss Ferguson had this to say about it at the time.

"Pogba signed for Juventus a long time ago as far as we're aware.

"It's a bit disappointing because I don't think he showed us any respect at all. To be honest, if they carry on that way, I'm quite happy that he's away, from me, anyway."

In his 2015 book Leading, Ferguson added: "There are one or two football agents I simply do not like, And Mino Raiola, Paul Pogba's agent, is one of them.

"I distrusted him from the moment I met him. He became Zlatan Ibrahimovic's agent while he was playing for Ajax, and eventually he would end up representing Pogba, who was only 18 years old at the time.

"We had Paul under a three-year contract, and it had a one-year renewal option which we were eager to sign. But Raiola suddenly appeared on the scene and our first meeting was a fiasco.

"He and I were like oil and water. From then on, our goose was cooked because Raiola had been able to ingratiate himself with Paul and his family and the player signed with Juventus."

Mourinho was made United manager in 2016 and re-signed Pogba from Juventus.

The Red Devils paid a club-record £89million to bring the Frenchman home, but the transfer would prove to be hugely problematic for Mourinho.

The Portuguese routinely clashed with Pogba, but, similarly to Ferguson, believed it was the Frenchman's entourage - namely Raiola - who was truly to blame for his conduct.

Mourinho spoke out about Pogba back in 2018 after first giving him the captain's armband and then taking it away again, after the Frenchman criticised his tactics in the press.

Making it clear he would be making all decisions regarding Pogba, not his agent, Mourinho said: "The only truth is that I made the decision of Paul not to be the second captain anymore. But no fall-out. No problems at all.

"I am the manager, I can make these decisions, no fall-out at all, no problems at all, just one decision that I don't have to explain."

"One day I give to David de Gea, Ashley Young, Chris Smalling. I thought about Paul already last season because a player of a different generation, younger player and the captain of the future because Valencia, Young they come more or less same age, same generation.

Two years on and the latest Pogba problem, sparked by Raiola, is current Red Devils boss Ole Gunnar Solskjaer's to deal with.

Reports claim the Norwegian is ready to part company with Pogba, and free up his wages, which can be used on a player who wants to be at the club.