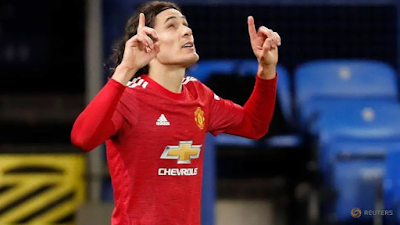 (Reuters) - Manchester United manager Ole Gunnar Solskjaer said striker Edinson Cavani is far too talented to be considered an impact substitute and the 33-year-old is likely to start more frequently as the Premier League season progresses.

Seven of Cavani’s eight league appearances since he joined from Paris St Germain in October have come from the bench, though he has been in the starting lineup for several cup games.

The Uruguay international has scored three league goals and assisted on two more, including one for Bruno Fernandes in the 2-2 Premier League draw at Leicester City last time out.

“He’s definitely a starter. You don’t classify a player of that quality as anything else,” Solskjaer told reporters.

“We have plenty of starters. More than 11 and that’s the thing when you’re at United.

“We have good competition for places and he’ll probably start more games than he won’t.”

Cavani joined United on a year-long deal and Solskjaer said he still has a lot to offer.

“At the moment it looks like he has a few years left in him. I wouldn’t say anything else,” Solskjaer added.

“He has made a great influence, a great impact when he has come here.”

United, fourth in the league with 27 points from 14 games, face Wolverhampton Wanderers later on Tuesday.

Reporting by Shrivathsa Sridhar in Bengaluru; Editing by Peter Rutherford