The Norwegian striker's agent has criticised the Manchester United boss for comparing him to the Inter striker in the past Manchester ... 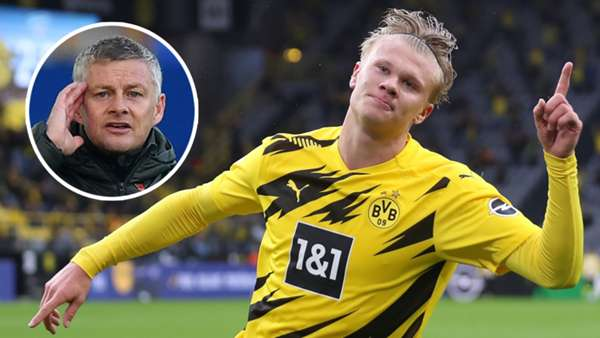 Manchester United boss Ole Gunnar Solskjaer was wrong to compare Erling Haaland to Romelu Lukaku, according to Mino Raiola, who insists the Borussia Dortmund star is more like Zlatan Ibrahimovic.

Haaland has enjoyed a meteoric rise over the past 18 months, bursting onto the Champions League scene with Red Bull Salzburg before becoming an instant hit at Dortmund.

The striker has managed 33 goals in all competitions since his switch to the German club in January 2020, with his impressive scoring feats sparking speculation that his stay at Westfalenstadion could be brief.

However, during an in-depth interview with  Tuttosport , Raiola insisted the 20-year-old is happy in his current surroundings, likening him to Edvard Munch's famous 'The Scream' painting while revealing the true depth of the player's competitive edge.

He also referenced previous comments made by Ole Gunnar Solskjaer comparing Haaland to fellow forward Romelu Lukaku, insisting the Manchester United boss should focus on getting the best out of Paul Pogba , another of his clients, rather than commenting on other players.

"Haaland is like Ibra when he was 20," Raiola said.

"Solskjaer is a good guy but he was wrong when he said that Erling is like Lukaku - it would be better if Solskjaer thought about finding a way to make Pogba play like a champion, instead of talking about Haaland."

He continued: "Erling Haaland is like a painting, he is like Munch's Scream because he causes fear in the defenders.

"He called me after being substituted at 85 [minutes against Hertha Berlin]: he had scored four goals, he wanted to score another. He was furious!

"He wants to be the best, even if he's playing checkers."

Haaland was linked with United before opting to join Dortmund, who concluded his signing just prior to the January transfer window opening on a contract until the end of the 2023-24 season.

There is rumoured to be a release clause in his deal, however, and Real Madrid - among other clubs - have been linked with a swoop for his services.

"I can't talk about Haaland release clause," Raiola said. "Rumours say Real Madrid want him, but this is not new to me... but he is very happy with Borussia Dortmund.

"Erling wants to win the Champions League. When he'll leave the club, it will be for his ambition and not for money."