The Champions League nears the crunch: Inter Milan are on the brink of embarrassing KO as PSG, Leipzig, Ajax and Atalanta sweat on last-16 places and EIGHT teams - including Liverpool and Man United - make their final push

It's getting tense as the Champions League reaches matchday five Inter Milan are staring down the barrel of an embarrassing early elimin... 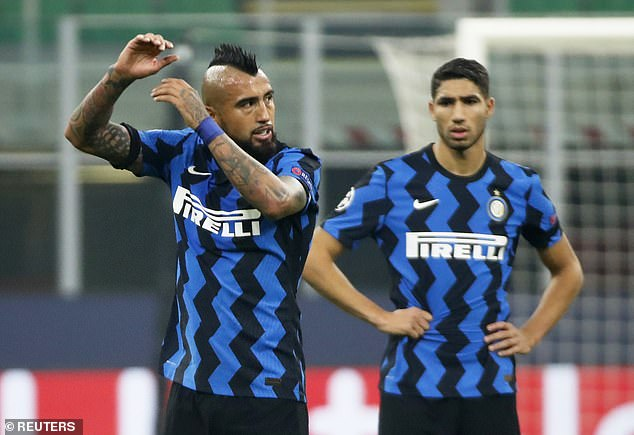 It's decision time in the Champions League this week as Europe's finest scramble to book their places in the knockout rounds in the new year.

A handful of sides have already made it safely through to the last-16 with two rounds of games remaining and another group will join them if results go their way.

Seven clubs have already been eliminated and are left fighting for the consolation of Europa League football after Christmas.

And others, including big names such as Inter Milan, Paris Saint-Germain and Ajax, are still sweating on their progression with elimination an unthinkable embarrassment.

Ahead of the fifth round of group stage matches on Tuesday and Wednesday, here's the state of play.

It's not quite feet-up time but the pressure is certainly reduced on Bayern Munich, Manchester City, Chelsea, Sevilla, Barcelona and Juventus, who all booked their passage to the knockout phase last week.

Reigning champions Bayern have picked up where they left off last season with four wins from four not only assuring them of the last-16 but a seeding as group winners. They make the trip to Atletico Madrid on Tuesday knowing they can't be caught.

Manchester City also have an unblemished record and will secure top spot if they avoid defeat away to Porto on Tuesday.

Chelsea got through thanks to their win over Rennes last week and all that's left is to fight it out with Sevilla for top spot. The two sides meet in Spain on Wednesday.

Barcelona may be struggling domestically but have a 100 per cent record in Europe. A win over Ferencvaros secures top spot with Juventus three points behind but also already qualified.

ON THE BRINK OF THE KNOCKOUT STAGE

Eight teams have the opportunity to join the six already qualified over the next two nights.

In Group D, Liverpool will get through if they avoid defeat by Ajax at Anfield on Tuesday.

It's also the same equation for Manchester United, who top Group H, and need just a point at home to Paris Saint-Germain to advance.

Ole Gunnar Solskjaer's side will be confirmed as group winners if they win and RB Leipzig don't against Istanbul Basaksehir. Alternatively, if United draw and Leipzig lose.

Atletico will go through this week if they beat Bayern and Lokomotiv Moscow fail to beat Red Bull Salzburg.