THE NUMBERS BEHIND RASHFORD'S 50-GOAL ACHIEVEMENT

Marcus Rashford's opener in Manchester United's 2-2 draw with Leicester City was his 50th Premier League goal for the club. The ho... 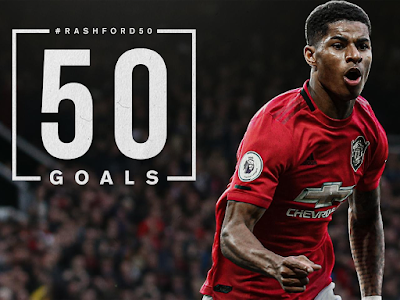 Marcus Rashford's opener in Manchester United's 2-2 draw with Leicester City was his 50th Premier League goal for the club.

The homegrown hero latched on to Bruno Fernandes's through ball to score past Kasper Schmeichel and become the 11th Red to hit that landmark in the competition, since it was rebranded in 1992.

Rashford's half-century was brought up in his 156th league appearance, 114 of which have been starts, and, at 23 years and 56 days, he is the third-youngest player to make it to 50 for United in the Premier League era, after all-time leading goalscorer Wayne Rooney (22 years, 157 days) and Cristiano Ronaldo (22 years, 341 days).

Rashford is one of only two current players on the list, after Anthony Martial, who also notched his 50th league goal during a 2-2 draw - this one at home to Southampton towards the end of last season.

Of course, Marcus got off to a flyer in the division, notching a brace on his debut against Arsenal, and he soon followed that up with a winner in a Manchester derby at the Etihad Stadium - however, 23 of his 50 efforts have come in his last 45 appearances, since the beginning of the 2019/20 season.

Rashford still has some way to go to match the efforts of those at the top of the list, with Rooney leading the way on 183, followed by Academy graduates in Ryan Giggs (109) and Paul Scholes (107).

Ruud van Nistelrooy, Andy Cole and current boss Ole Gunnar Solskjaer all hit 90+ goals without quite making it to three figures in a red shirt, while Eric Cantona and David Beckham are the others to register a half-century of Premier League goals while with United

Rashford's preferred Premier League opponents are actually Leicester City, with the 23-year-old now having netted five times against the Foxes in the top flight.

He's scored four against Bournemouth and three against nine different clubs, including Manchester City, Tottenham, Chelsea and Liverpool, showing he's a man for the big occasion.

Marcus has only failed to score against six of the clubs he's come up against in the division, including Wolves - but hopefully that can change when we take on the Midlanders at Old Trafford tomorrow (Tuesday).