What’s the situation with the team news? Particularly Marcus Rashford? He had to come off the other day and he’s not trained fully today. ... 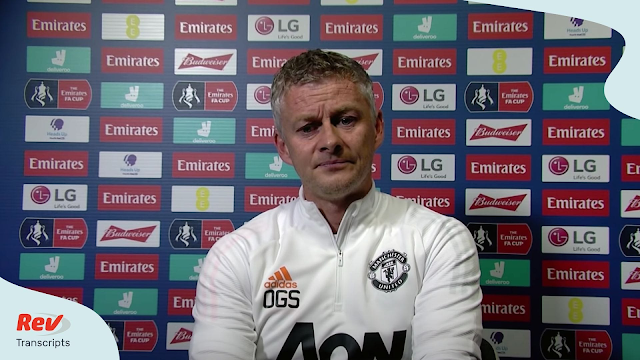 What’s the situation with the team news? Particularly Marcus Rashford?

He had to come off the other day and he’s not trained fully today. Marcus has been training this morning, not fully but he joined in with the group. His shoulder stopped him finishing the game so he’s been getting treatment and hopefully he’ll be part of the squad that travels, he’s having treatment now after training.

Is it going to be a bit weird in front of fans again?

It’ll be great playing in front of fans, looking forward to it, of course we won’t have our fans there but will have to use the energy and thrive off the home fans and make them quiet hopefully and edgy, we’re looking forward to it. It’s great to see fans back in a stadium, hopefully we’ll get them back at Old Trafford soon. Football is not the same without them. It’s not been the same. We’re a bit bruised after Wednesday night but hopefully we’ll be ready to go again.

Depends on how many games do you wanna go back. Football is a game with human beings and live their own lives. we’ve played some fantastic games, go 30 games back or 40 games back, I think we’re one of the most consistent teams, performances wise, in the Premier League. You’re disappointed when you lose a game, I think we played really well on Wednesday, and it’s fine margins at times that decide a game if you win or lose. The PSG game was miles better than West Brom, but you get the three points against West Brom and you don’t get three points against PSG. I think we’re getting less bad performances and getting more consistent. You can never control the result in the end, that’s decided by fine margins.

If you win the game tomorrow, United could find themselves in the top four. After what’s been a difficult start to the season, with the short turn around time after last season, how much of a boost would that be?

Of course it would be for all sorts of reasons, we know we’ve got a game less and we’ll get that back at some point as well, and with pre-season being as short as it was, to move closer to the top would be a great achievement at this point, but it’s a long season. We’ve shown some great consistency away from home lately, great results, and hopefully we can continue that.

No, I haven’t sat down and had discussions with David, no, of course when you’re here it’s the biggest club in the world and a different animal to anything else but we’ve had other discussions and I really admire David for what he’s done in his career. You see the way West Ham perform and the results he’s getting shows his qualities.

There’s not much to say. Marcus trained but not fully. But hopefully with the treatment he’s getting he can travel. Luke’s not ready yet, apart from that we had a big squad training again.

I know you’ve talked about the impact Bruno has had on the squad, Cavani seems to be having a similar impact. How important is it on the squad having that experience when you’ve got such a young side?

Last season we were the youngest team in the Premier League and have been looking at ways to improve the squad, young talent or experienced ones and with the signings of Bruno, Donny and Alex and Edinson the balance of the squad has been improved. For one, his positioning, he’s a different type of centre forward, he can play a different way and his experience in world-football, he’s come in and shown the young lads how to live your life and how to last your career.

I have to ask you about Norway’s new national coach appointment. Will he be a success and give the Norwegian spot that we’ve missed in the World Cup?

I think he’s a great signing for the national team. He’s a good friend of mine and probably the least hidden secret that he would come in and take charge of the national team. Lars [Lagerbäck] has taken the team in the right direction and hopefully Ståle [Solbakke] can take it one step further so we can qualify. I’ll be having discussions with him of course. We’ve been keeping in touch for the last few years. You never like to see someone lose their job, especially when they’ve done well, but it’s a chance for Norway that we couldn’t say no to.

Facundo Pellistri came in during the summer and I wonder if Amad Diallo will join you in January?

Facundo has come in trained with the first-team, he’s done well, we felt now is a time for him to get game time, he played a couple of games in Reserves, gradually settled in nicely and is more used to us. Amad has come on a few times for Atalanta lately and is a very exciting talent and hopefully we’ll get the work permit and he’ll be with us in January. He’s a very, very exciting boy as well.

Marcus plays all the time for you and he’ll run through walls for you. Last season he ended up with a serious back injury and played through the pain a lot. How concerned are you, with all the games you’ve got, about his shoulder, and are you going to have to try to carve a period of time for him to give him a rest. How are you going to handle that situation?

That’s a medical issue. How serious is it? At the moment he’s getting that soreness towards the end that stops him completing games. Hopefully it won’t take too long to completely go away. You think about how you manage these players over the whole season anyway and Marcus, as you say, will run through a brick wall for you. That’s the sort of player he is. We’ve just got to keep our fingers crossed that it doesn’t get worse because at the moment it’s still manageable.

Anthony’s had a difficult season so far with the suspension and missing a couple of chances. Do you think his confidence has been dented by a striker of Edinson’s expertise coming in?

No, confidence wise, Edinson coming in is a boost for the whole squad. Edinson speaks really good French as well, so I’ve seen him and Anthony getting on well. The sending off stopped his season a little bit because he was just getting going, I felt, but we’re very happy with his contribution. On Wednesday night, everyone points at his one chance he missed, but what about his chances he set up? His overall contribution to the team, his cleverness, even his defending is improving, so it’s just one of those things. Of course, as a striker, you get measured by goals. As soon as you get one, if it’s off his backside or his head or his heel, it doesn’t matter. He’ll get going again, I’m not worried about that.

You had some concerns about the scheduling of the Everton game coming so close after the Champions League in midweek. Tomorrow you play at 5.30pm then travel on Tuesday. Do you have concerns that the Premier League isn’t helping you out?

5.30pm for us is perfect. It’s bang, smack in the middle. It’s when you travel on a Wednesday to Turkey, then have to play 12.30pm. Tottenham were in Bulgaria and played on the Thursday night then on Sunday morning, I don’t think that’s fair. And Liverpool have had that a couple of times. It’s that 12.30pm slot. The boys recover so much better if they can sleep better. Wake up at 8.30am or 9am, eat, and then go and play. Those extra hours would be very beneficial.

Moyes has mentioned he only got 10 months in charge at United, Van Gaal got two years, Jose got two and a bit years. You’re coming up to your second year anniversary. You’ve got the backing of the club long-term. Do you think that’s where the the club has struggled in recent years, with not backing a manager long-term?

From my experience and my discussions with the club, we think long-term. You’ve got to look at the short-term results as well, but my vision is long-term and my discussions with the club have always been long-term. But you can’t not think about the next six games. But you also have to plan for the bigger picture. For me, I can only speak from my experience.

You said it’s up to fine margins in terms of results. When you’re playing so many games in such a short spell of time, in so many competitions, that require different team shapes, like West Ham will probably playing a back three, Southampton played a back four, how difficult is it to get those fine margins to swing in your direction?

There’s many different components to that. You might tweak something tactically yourself, as we tried against Southampton it worked well. You think about which spaces the opponents leaves you to attack in to. But you also think about a way of defending against them. But you also have to find a way that is true to your main ideas, that’s the biggest things. You have to stick to your own tactics but you have to think about how can we solve the problems they might cause us and how can we tweak something to cause them a problem. We’ve got our own style of play but we analyse every opponent differently. With this congestion you don’t get a lot of time to work on the pitch, that’s true, so we have to do it in meetings. The boys have been very focussed in the meetings. Sometimes when you play late on you might have a session in the morning. There are loads of things you have to do but you have to stay true to your own identity.

You’ve mentioned before that the job David before and the job you’ve got now is a different kind of animal. Do you think now your job is quite unique in football with the type of focus and pressure it brings?

Yeh. I think so. I wouldn’t want it any different. That comes from the passion our fans have, the passion have media have about us, our history, our success, and the hunger and demand for success. We are lucky in that respect that we have so many fans. You just have to withstand or enjoy any pressure that gives you. We are working to that with the players as well. They are getting used to playing for Man United. There are different demands than playing for other teams.

You’re not the only club showing a certain degree of inconsistency. Do you think it’s one of those seasons where it won’t take a huge points total to win the league and it might be encouraging to know you can afford the odd blip along the way?

I don’t think you’ll see the points you’ve seen the last three seasons because of the congestion and the preparation the teams have had. It’s one of those seasons where after a blip you have to get back on the performance again. There have been so many examples of teams slipping up when you think they might run away. We’re going to do as well as we can, for as long as we can, and hang in there. We want to keep moving up the table.