Manchester United laboured to a 0-0 draw with Manchester City on Saturday night, having expressed their desire to "start bright"... 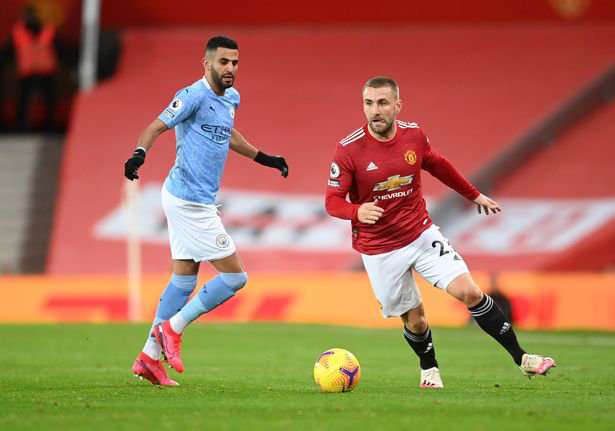 Manchester United laboured to a 0-0 draw with Manchester City on Saturday night, having expressed their desire to "start bright" before the derby clash

Luke Shaw has revealed Manchester United players were eager to “start bright” in their 0-0 draw with Manchester City on Saturday night.

The latest Manchester derby proved one of the most uneventful in recent memory, with neither side carving open too many clear-cut opportunities at Old Trafford.

United thought they had a chance to convert from the penalty spot in the second half when Kyle Walker brought down Marcus Rashford inside the box, only for VAR to overrule referee Chris Kavanagh’s decision to award the spot-kick after spotting an offside in the build-up.

While it was hardly a performance to savour, Ole Gunnar Solskjaer’s men are now unbeaten in their last five Premier League games and can climb into the top four by winning their game-in-hand.

And after Saturday’s stalemate, Shaw revealed that United stars had spoken about their desire to make a strong start against their bitter rivals.

“I’d be lying if I said we haven't started slowly the last three of four games,” the left-back said.

“Maybe most of the games this season we haven't started brightly. We said before the game 'we need to start bright' because if we don't against Man City, we could be looking at three or four-nil down after 30 minutes.

“So we started better but I still feel we could push more and start brighter in more games. We need to keep our heads up.

“I would say it was very tight, a very even game. We made it difficult for them at times, they couldn't get the normal rhythm going. Either team could have taken it towards the end.

“I felt, especially in the first half, we lacked something, that final third ball. Bruno a couple of times, passes that he would have normally have made.”

Next up for United is a a trip to Sheffield United on Thursday night.