Caroline Weir scored a brilliant injury-time goal as Manchester City came from behind to deservedly beat Arsenal 2-1 at the Academy Stadiu... 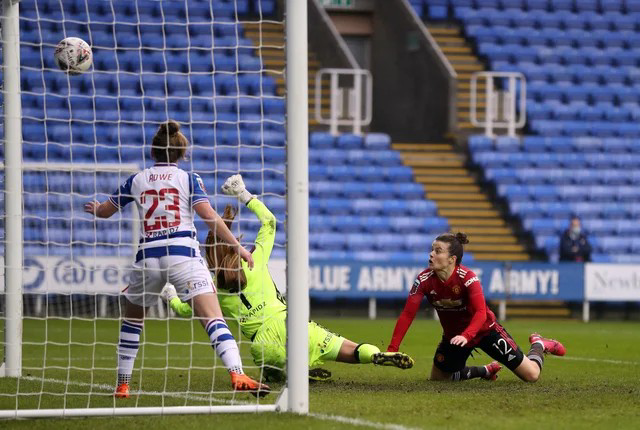 Caroline Weir scored a brilliant injury-time goal as Manchester City came from behind to deservedly beat Arsenal 2-1 at the Academy Stadium.

The Gunners had the chance to open up a seven point gap to Gareth Taylor’s side in the Women’s Super League and made the perfect start when Vivianne Miedema fired in her 16th goal of the season with a sublime low 20-yard strike after just three minutes.

But the hosts were level on the half hour mark when Sam Mewis’ header from Alex Greenwood’s corner bounced up and over Miedema on the line.

City continued to press for the win in the second half as Arsenal dropped deeper and deeper, seemingly content with a point.

And it took until the dying moments for the home side to finally find the winner when Weir guided an excellent left-footed effort into the bottom corner from the edge of the area.

The win means City move one point behind Arsenal and are now just five points off the top of the table.

Elsewhere, Manchester United extended their lead at the top of the WSL with a 2-1 victory away at Reading.

Leah Galton put the Red Devils ahead in the 32nd minute when she ran onto a defence-splitting pass from Hayley Ladd and saw her shot squirm through the hand of keeper Grace Moloney.

But Reading equalised 11 minutes into the second half when Jess Fishlock’s effort took a wicked deflection off Millie Turner which wrong-footed Mary Earps and trickled into the net.

United probed for a winner in the second half and eventually found one eight minutes from time as a flicked on corner allowed Ladd to nod home from six yards.

Sam Kerr scored the only goal of the game midway through the first half when she got on the end of Pernille Harder’s cross to head home.

Meanwhile, Bristol City’s winless run in the WSL continued as they were hammered 4-0 at home by West Ham.

Jemma Purfield’s own goal gave the Hammers a slender lead at the break, before Emily van Egmond, Rachel Daly and Martha Thomas added three more goals in the second half.

Bristol City’s second defeat in four days comes after Tanya Oxtoby’s side were dispatched 4-0 by Aston Villa at Twerton Park on Wednesday.

And in the other match on Sunday, Alex Morgan scored from the penalty spot for the second successive game as Spurs beat Villa 3-1 at The Hive.

Morgan scored her second penalty in seven days for Tottenham

Morgan put Tottenham ahead in the 13th minute, only for Nadine Hanssen to level shortly after.

A Caroline Siems own goal then gave the Lilywhites the lead again nine minutes before half-time.

And Rosella Ayane made sure of the win in the second half to move Rehanne Skinner’s side up to eighth and give them back-to-back victories for the first time since September 2019.

Birmingham City’s home match against Everton was postponed due to a waterlogged pitch.