Manchester United make the long trip south to London to take on Arsenal at the Emirates Stadium this evening. The Red Devils had pretty good... 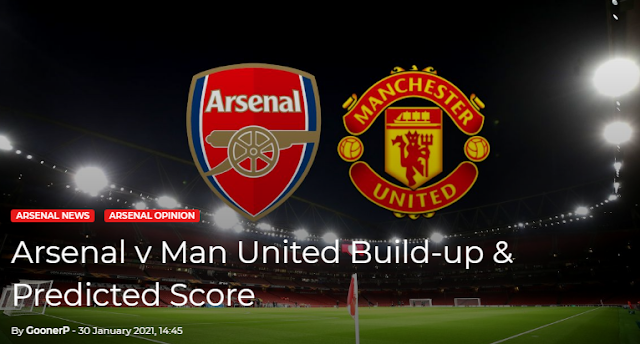 Manchester United make the long trip south to London to take on Arsenal at the Emirates Stadium this evening.

The Red Devils had pretty good form coming into the match before their shock defeat to bottom-or-the-table Sheffield United, although that is their only loss from their last 14 Premier League outings, winning 10 of those.

Arsenal’s form was dreadful prior to Christmas, but a win against Chelsea on Boxing Day reignited our side to pick up 16 points from our last six in the division.

While there are so many reasons for both sides to be confident today, the most likely way to read the fixture will hopefully go on our previous matches.

Mikel Arteta is yet to lose to Manchester United, in fact he has two wins from two and is yet to see his side concede in the tie.

Amidst our dreadful form prior to Christmas, we were still able to take all three points from our trip to Old Trafford, and fingers crossed we can continue with that.

For me, Arsenal have the best form of all the teams in the division at present excluding Manchester City, who look like they are set to runaway with the title.

The Red Devils place up the table is hard to get my head around if I’m honest. They don’t play like a team that are title contenders, nor do they have the fear factor that a side should have near the top, and I struggle to believe they are the favourites.

Arsenal should be able to come away with a win today. I don’t feel like it will be plain-sailing, but even without Aubameyang I believe our team has too much in attack to not succeed. I think United will fear the threat we will be bringing despite our two sides’ league positions.

I’m going for a 2-1 win. I can see both sides being really up for this fixture, and while it could well start with both sides eyeing each other up, I believe our side will have the power needed to secure the victory.