Manchester United – Liverpool: Bruno Fernandes landed the final blow, in the form of a fantastic free kick, in a back-and-forth battle at ... 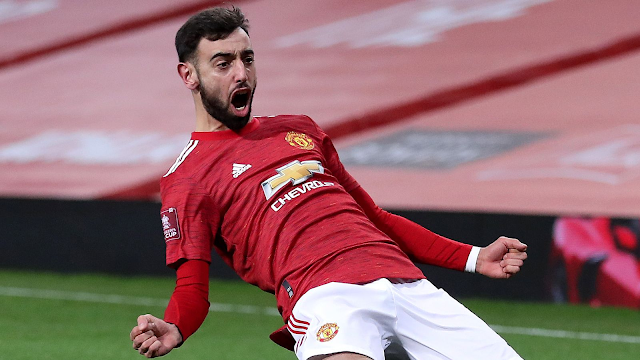 Manchester United – Liverpool: Bruno Fernandes landed the final blow, in the form of a fantastic free kick, in a back-and-forth battle at Old Trafford on Sunday, securing a deeply satisfying 3-2 victory for the Red Devils and advancing to the fifth round of the FA Cup in the process.

Mohamed Salah broke the scoreless deadlock — something neither side could do when they met in the Premier League just seven days ago — with a delicately dinked finish in the 18th minute. Roberto Firmino found the Egyptian superstar in the smallest bit of space between Luke Shaw and Victor Lindelof, but found a way to fit the ball in and put Salah one-on-one with Dean Henderson as he raced off his line to no avail.

Manchester United didn’t need long to pull level, though, and it all started with a strong piece of defensive work from Paul Pogba as Firmino looked set to fire on Henderson’s goal. Pogba intervened and circulated the ball to launch a quick counter-attack which culminated in Marcus Rashford expertly playing Mason Greenwood in behind the Liverpool defense, and the 19-year-old was clinical with his finish from a difficult angle.

Greenwood returned the favor to Rashford, not even three minutes into the second half, to give Manchester United the lead. 19-year-old defender Rhys Williams was dispossessed inside his own defensive third and the Red Devils wasted little time in snatching the ball off him before Greenwood slipped the ball in behind for Rashford to slide the ball under Alisson for 2-1.

Speaking of tragic defensive errors of a side’s own doing, Liverpool quickly drew level at 2-2 after Harry Maguire played Edinson Cavani into trouble deep inside Manchester United territory. All Cavani could do was play a high-risk, first-time sideways pass, which was quickly intercepted and sent forward. Eventually the ball fell to Salah for a simple, left-footed finish.

With 78 minutes on the clock, Fernandes, fresh off the bench 12 minutes earlier, provided the magical touch from 20 yards out.

Up next for Manchester United in the FA Cup will be a visit from fellow Premier League side West Ham United.