Bruno Fernandes says he does not need to be rested as the Manchester United midfielder vowed to fight for trophies until the very end. Thi... 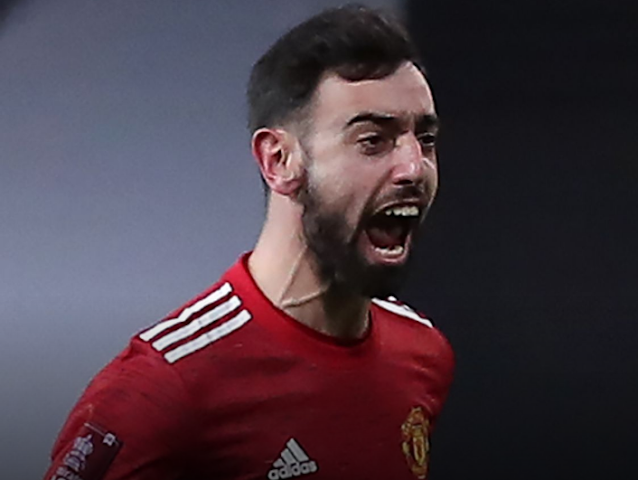 Bruno Fernandes says he does not need to be rested as the Manchester United midfielder vowed to fight for trophies until the very end.

This week brings up the one-year anniversary of the Fernandes' £47m switch from Sporting Lisbon, during which time United have transformed into a team now sitting top of the Premier League.

Nobody has scored more goals for a Premier League club than Fernandes since his debut, with the midfielder taking his tally to 28 with his free-kick winner against rivals Liverpool on Sunday to seal United's place in the FA Cup fifth round.

Fernandes started on the bench against Liverpool, but he backed Ole Gunnar Solskjaer after the United manager dismissed suggestions he needed a rest.

"Tired? With 26 years old I can't be tired!" said Fernandes.

"Of course the coach knows what is better for the team and (for FA Cup tie) he chose to play with Donny (Van De Beek) to give some freshness to the team.

"I think it's fair enough because Donny is training really well, he's been important for us and will be more and more important in the future."

For Fernandes, who has collected four Premier League player of the month awards out of a possible seven, it is the norm.

"I came to the club because I knew I will come to a club who wants to win everything - and my mentality, my way to be in my life and football is about winning," Fernandes said.

"And I will believe until it's not more possible, you know? Like when I see someone get the trophy before me then I will (have) lost my belief."

Fernandes' winning mentality is clear and fuelled by his hatred of losing.

"I don't conform with losing games is normal stuff. For me, losing is not normal so my mentality comes from that, you know?

"Also playing whatever it is, when I was playing with my friends, my brother, with my neighbours, I never want to lose so I want to win every time. This mentality will be with me for the rest of my life, I think."