Ole Gunnar Solskjaer and Man Utd need to sign a right winger in the transfer window after their failure to sign Sancho last summer. To say... 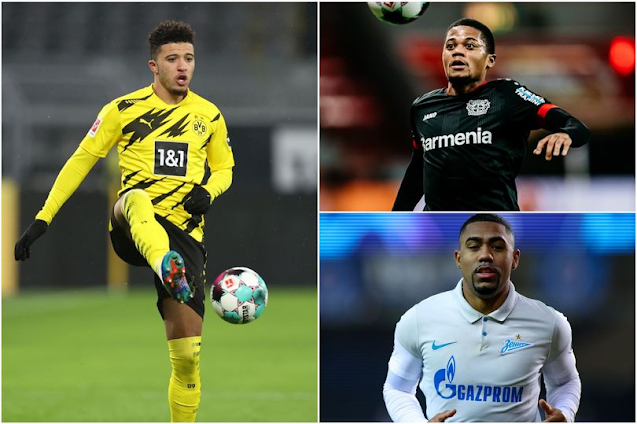 Ole Gunnar Solskjaer and Man Utd need to sign a right winger in the transfer window after their failure to sign Sancho last summer.

To say talk of Jadon Sancho moving to Manchester United has cooled would be a major understatement.

Following their unsuccessful bid to land the Borussia Dortmund star last summer, United were left without the elite right-winger they wanted to sign in the transfer window. And while Edinson Cavani has been a good addition up front, with Amad Diallo and Facundo Pellistri signed for the future, the right-wing position remains an issue at Old Trafford.

Sancho may still be attainable but Ole Gunnar Solskjaer's side must cast their net a little further, most likely in the summer window, at targets other than the Dortmund man.

New Order Analytics said: "Since leaving Barcelona following a disappointing time at the Camp Nou, Malcom’s performances at Zenit has been excellent – suggesting he could return to the elite level. At 23 years old, there is plenty of time to develop, and although he does not create chances at the same rate as Sancho, he offers creativity in his passing and dribbling on the right wing."

Like Sancho at Dortmund, Malcom tends to feature on the right of his side’s attack, although, as a left-footer the Zenit man cuts inside more naturally and drive towards the goal, while Sancho is more a provider than goal-getter on the right.

Like the Dortmund forward though, Malcom can also play on the left and through the middle, when required.

He’s very quick and skillful, averaging 7.7 dribbles per 90 minutes this season with a high success rate of 64 per cent across the Russian Premier League and Champions League.

This betters Sancho’s average in the Bundesliga and Champions League so far of 6.7 per 90 and 39 per cent, but it’s important to acknowledge the differences in the quality each player faces in their domestic leagues.

New Order Analytics said: "On track to becoming a superstar and Juventus will surely want to keep him. Having said that, they might change their stance if his exit could facilitate Paul Pogba’s arrival in the summer. Kulusevski has yet to put up phenomenal returns as either a goalscorer or creator, but his well-rounded profile at only 20 years old suggests there are no limits to his potential."

Kulusevski is quite different in profile to Sancho in that he stands taller at 6ft1in and he’s not as quick with the ball at his feet, yet he's got technical skill and is a real threat inside the attacking third. He’s good with both feet and his first touch normally good, helping him get away from opposition defenders.

Although he's a right-winger like Sancho, Kulusevski has yet to solidify himself regularly in the Juve side, meaning he has played in different positions for Andrea Pirlo. Yet his performances have been consistent when he has featured.

He’s managed six-goal contributions — four goals, two assists — so far which is impressive, particularly when you consider he’s played only roughly 1100 minutes across Serie A, Coppa Italia and the Champions League.

New Order Analytics said: "Admittedly, the Ukrainian Premier Liga is a significantly weaker standard than the Premier League and Dynamo Kyiv star Tsygankov may require time to adapt, in a similar vein to Fred’s initial transition period. However, given how his statistical outputs adjust to a Premier League standard, he is clearly good enough for the top level and at 23 years old, he could be a superstar at his peak."

There is some cautious optimism that Tsygankov could be a real talent, with the potential to play at the highest level. Like Sancho, he’s quick, nimble and he hits top speed almost instantly, making him a real menace in possession or when making runs from deep and in behind a high defensive line.

He has tended to dribble around half the number of times as Sancho this season, yet he looks a bigger goal threat, with his shot average of 2.2 per 90 and goal average of 0.64 better than the England international.

Obviously, this comes against weaker opposition. But as the comparison radar above shows, his current numbers adjust well to the Premier League standard based on their model.

New Order Analytics said: "Less than two years, Bayer Leverkusen winger Bailey was being linked with virtually every elite club in Europe. That interest appears to have cooled down following injuries and a slight dip in form. Nevertheless, he remains a phenomenal talent who appears more of a goalscoring threat than Sancho, despite being less capable as a creator or passer."

Like Sancho and the other players highlighted, Bailey can perform on either flank, yet, for Peter Bosz’s men, he plays mainly on the right. This season, he’s registered as many goal contributions as Sancho (13) although he’s scored more (nine) and assisted less (four) than the Dortmund man.

This ties into the contrasting strengths of right-footed or left-footed players on the right flank. Sancho, a right-footer, is naturally inclined to create more chances than score them. It’s the opposite for left-footed Bailey who loves cutting inside and shooting.

Interestingly given that both compete in the same division, this season Bailey is bettering Sancho in terms of dribbles attempted per 90 with an average of 7.3, and his success rate in those dribbles of 51 per cent is also higher too.

New Order Analytics said: "Chukwueze, currently of Villareal, is probably the player who would need to improve the most to play for an elite side in Europe. Regardless, at 21 years old, he terrifies defences when he runs at them and creates chances for teammates at a good rate. Chukwueze's most obvious area for improvement would be finding the right trade-off with his passing as he can be guilty of needlessly giving possession away."

There is no doubt Chukwueze is rawer than Sancho and is offering less in terms of direct goal contributions — six so far this season (two goals, four assists).

The Villareal man is slightly smaller than Sancho at 5ft8in, yet that low centre of gravity, plus his speed, makes him a great dribbler. For players who have played 700+ La Liga minutes so far this season, he ranks fifth in terms of the highest number of dribbles attempted with 8.29 per 90.

Chukwueze is usually positioned high and wide right, a prime location to receive the ball in space before driving at a defence.

Although he likes to cut in onto his favoured left foot, he can also dribble wide and around a defender before looking to thread passes across goal.

He may be slightly older than Sancho, but he hasn’t made as many first-team appearances. So he’s probably slightly behind the Dortmund attacker in terms of development, which may explain his lower output in certain key areas as highlighted in the comparison radar, but there's still lots to like about Chukwueze.