Man United maintained their place at the top of the Premier League table with a 0-0 draw at Liverpool on Sunday. Gary Neville believes Man... 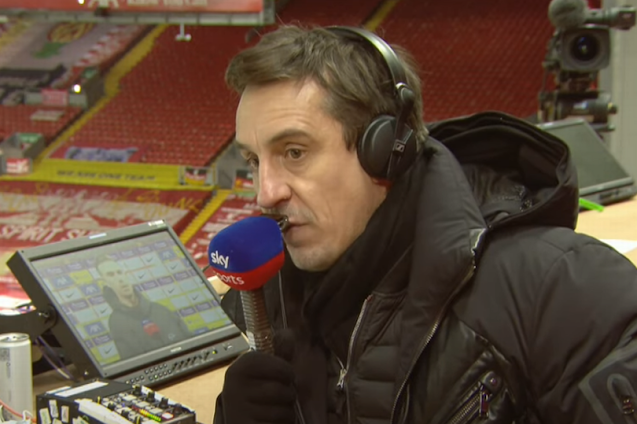 Man United maintained their place at the top of the Premier League table with a 0-0 draw at Liverpool on Sunday.

Gary Neville believes Manchester United need a centre-back and a right-winger to become a title-winning team.

United visited reigning champions Liverpool in top spot on Sunday and maintained their three-point lead over their rivals courtesy of a goalless draw.

However, neighbours Manchester City closed the gap on Ole Gunnar Solskjaer's side to just two points with a 4-0 victory over Crystal Palace and have a game in hand on the Reds.

Neville told Sky Sports: “I look at the game on Sunday and think, 'how do you go from that to becoming title winners?' I think one area is that United need to push up the pitch a bit more, up in the game a bit more. If you look at Liverpool, even with Fabinho and Henderson in defence, they are well up the pitch, on the halfway line.

“We know Ole Gunnar Solskjaer wanted that right-wing position filled in the summer, and he didn't get it, and it's just posing a little bit of a problem. If there was a goalscoring right winger in that squad today, with Rashford and Anthony Martial, that I think would be a difference.

“So a centre-back that gets them up the pitch that 10 yards, and a right winger, they are the two positions I'd focus on."

Meanwhile, Neville believes Paul Pogba will need to be at his best for the remainder of the campaign if United are to stand a chance of ending their eight-year wait for a league title.

"I think Manchester United's chances of winning this league are slim - Liverpool and Man City  are still the best two teams in this league," Neville said. “But the slim chance they have to win this league will depend on something like Paul Pogba delivering a cameo of two or three months of brilliance, which he is capable of.

“He's got confidence, he's got arrogance - good arrogance, in a sense that he believes in himself. He thinks he should be playing in the biggest games in the world, and winning titles, and thinking positive thoughts, thinking you're the best is a big thing when you're looking to win."