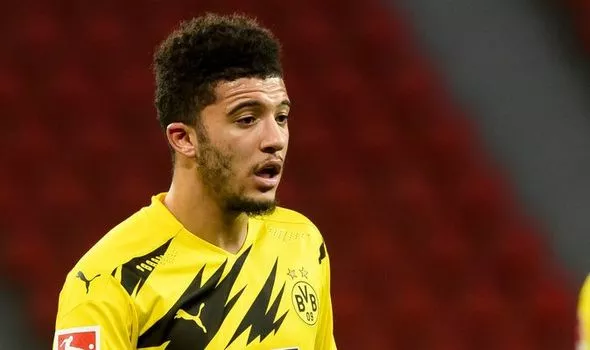 Former Manchester United forward Dimitar Berbatov has claimed that Jadon Sancho should avoid signing for the Red Devils amid renewed speculation over his future. The Borussia Dortmund winger has been tracked by United for some time with the 20-time Premier League champions showing a particularly keen interest during the summer.
However, the Bundesliga outfit held firm after slapping a £115million price tag on their star man, making a deal impossible.Despite their summer frustrations, United have not cooled their interest in Sancho and are still widely tipped to land the forward at some point in the near future.It was reported earlier this week that Dortmund are resigned to losing the 20-year-old at the end of the season for a smaller fee than the nine-figure sum they demanded in the summer.Although United could go back in for Sancho ahead of next season, Berbatov has suggested that the England star may be better off elsewhere.The Bulgarian marksman, who scored 56 goals in 149 appearances for the club, told Betfair that he can see Sancho struggling for first-team minutes under Ole Gunnar Solskjaer in a similar predicament to that of midfielder Donny van de Beek.

"I have read more rumours about Jadon Sancho at Dortmund and how United could sign him," said Berbatov. "So, you sign Sancho and where do you play him?"They will have lots of games in the Europa League and FA Cup, but then what happens to people like Donny Van de Beek? It would be Van de Beek two if they sign him.

"Yes, he is a great player but then do you just have too much talent? Cavani has been a great signing, and do you drop him?

"You will not turn down Sancho and he is a good player and it is whether you want that luxury headache where you tell people you are rested today, etc.

"It is not a good conversation, I am telling you from experience."

Despite United's strong interest in Sancho and the apparent willingness of Dortmund to let him leave in the summer, Berbatov revealed that he can not see the move happening any time soon with the Red Devils currently well-balanced and in title-chasing form.Solskjaer's side can return to the summit of the Premier League table with a win over strugglers Sheffield United on Wednesday evening."I still don't think it will happen," he continued. "The way things are going at the moment credit has to go to Ole and the players now."He has found the right balance about which players are playing. He has found that delicate balance with players not complaining and that is a difficult thing. The manager has taken the right decisions so far."If Sancho signed for another team or a rival it wouldn't be a blow. Sir Alex Ferguson got rid of players because no-one is bigger than the club, they were replaced.

"That's still the case, no one is bigger than Manchester United, so, I'm not expecting anything to happen."United have already signed Amad Diallo from Atalanta this month, with the teenager agreeing a four-and-a-half-year deal at the beginning of the window.Solskjaer admitted on Tuesday that he is not expecting any further incomings before Monday's deadline, but hinted that a number of fringe players could leave the club on loan.Out-of-favour midfielder Jesse Lingard is among those who may be shipped out on a temporary basis with West Ham United said to be keen on a six-month deal.