Liverpool and Manchester United could be interested in a move for the 17-year-old, who is holding out for improved terms at Bayern Munich.... 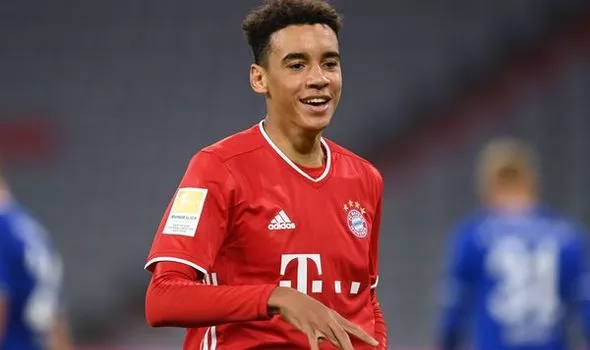 Liverpool and Manchester United could be interested in a move for the 17-year-old, who is holding out for improved terms at Bayern Munich.

Liverpool and Manchester United are paying close attention to contract negotiations concerning Bayern Munich youngster Jamal Musiala, with talks said to have reached deadlock. Musiala, 17, joined the Bundesliga champions in July 2019 having progressed through Chelsea’s Academy and is currently holding out for a new contract in the region of £100,000 per week, according to Goal.
Despite featuring for the first-team 21 times so far this campaign, the England Under-21 star is currently on a youth wage that is due to expire in 18 months.

If a new contract can’t be agreed, there’s every chance the talented youngster will attempt to engineer a move away from Bayern this summer.

Musiala has followed a path taken by a number of young, English players at Premier League clubs, with Jadon Sancho, Reiss Nelson, Ademola Lookman and Rabbi Matondo among those who have flocked to the Bundesliga in the hope of proving a point.

Bayern manager Hansi Flick has high hopes for the talented winger, who is the youngest ever player to score and play for Bayern in the German top flight.

Flick started Musiala in a Champions League group stage match away to Atletico Madrid in December and saw his faith repaid courtesy of an impressive display.

“I have to be careful [with him],” he said. “He is very much valued by our players, has tremendous quality, is calm on the ball and is difficult to stop in one-on-one situations. He still has to improve physical but we can be very satisfied with him.”

And this was not the first time that he had been singled out for praise.

"Everyone can see that he has enormous quality on the ball. He's very confident and cheeky. But he needs to improve his physical robustness and still has a long way to go. He's currently ahead of our other youth players. He has to keep going," Flick told reporters earlier this season.

"It's a lifelong learning process. I trust him to take the next step with the support of the top players.

"The important thing is that the young guys train with us. If you train with the best players at Bayern every day, you get better and develop very well. It's up to us to decide where and when he will play depending on the situation.

"He's a good option for the wings, At the moment, I see him as a first-team player. His development is the most important thing."