How the Man Utd players rated in their 2-1 victory over Fulham in the Premier League at Craven Cottage. David de Gea Had little to do in t... 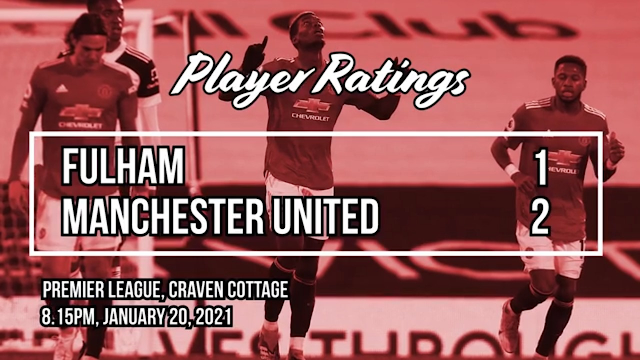 How the Man Utd players rated in their 2-1 victory over Fulham in the Premier League at Craven Cottage.

Had little to do in the first-half but made a big save from Ruben Loftus-Cheek at 2-1. Maintained concentration for when he was needed. 7

Played Ademola Lookman onside and was caught out again on another unconvincing night. Had to be told when to venture forward. Big block late on, though. 6

Dozily dared to let Lookman through when, had he stayed with him, he might have prevented the goal. Improved as the game wore on. 6

Embarked on the odd foray but got caught out when Loftus-Cheek was played through at 2-1. 6

Another fine performance and he forced United's equaliser. United coaches have stopped telling him when to go forward. 8

Played a pivotal role in the move for Edinson Cavani's leveller and complemented Paul Pogba in a bold duo. 6

Booked early on for a cynical foul but did not let it affect his performance level. Scored fabulously to put United ahead. 8

An entirely logical recall but Greenwood did not offer enough again from the right and his Reykjavik hangover continues. 5

Not off it but not on it, either. Surprisingly retained over Marcus Rashford and, though committed, was out-muscled by Fulham's defence. 6

Struck the post and immediately went about ensuring United would score from their next attack and they did. Worked tirelessly. 6

Pounced expertly for his fifth United goal and first from the start in the league. Should have scored in the second-half to make it easier. 7

Came on to energise the attack. 5

Made logical changes to freshen up the team and kept faith with starters. Should maybe have made changes earlier. 7