Danish model Katrina Maria was as unprepared for Sheffield United as the Man Utd boys were – watching on in tears as her team faced a humbli... 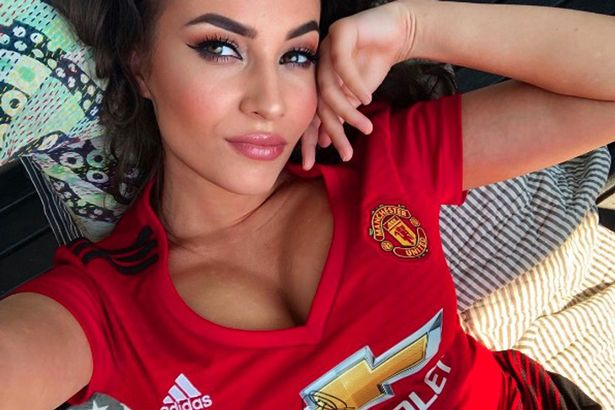 The sizzling model – regarded by the Old Trafford support as the sexiest Man United fan around – had high hopes when her beloved team entered the pitch on Wednesday night.

Katrina – who hails from the Faroe Islands – showed her support by wearing her away strip as the boys faced off against Sheffield United at Old Trafford.

Sharing a sexy selfie ahead of the match, Katrina wished her team well – and shared her hopes that the boys would romp to victory on the field.

Tipping her head to the side for her photo, Katrina looked dazzling as she posed on a bed.

She captioned her selfie, which she uploaded to Instagram: “Let’s gooo UNITED!!” alongside a devil emoji.

Anticipating a clear win from her team, she added: “I’m going for a 3-1 win for United! What do you predict?”

Katrina was off the mark with her prediction, however, as title chasing United were defeated 2-1 – with the bottom-of-the-table team causing quite the upset.

With Man U losing 0–1 at half time, Katrina shared a frustrated emoji on Instagram Stories, expressing anger with the mid-way result.

But things only got worse as the game ended with a 2–1 defeat and Katrina sharing a crying emoji after the last whistle was blown.

Manchester United boss Ole Gunnar Solskjaer said after the defeat: "It wasn't to be. The second goal we conceded is so poor, so sloppy. Easy. We stopped getting out to the ball – three or four bad decisions which is out of character.

"There will be no big inquest. There have been so many odd results this season but with the world as it is we have been the most consistent team – it hit us today."