United talisman Fernandes had an off day in the top of the table clash against Liverpool on Sunday before showing his frustration at being... 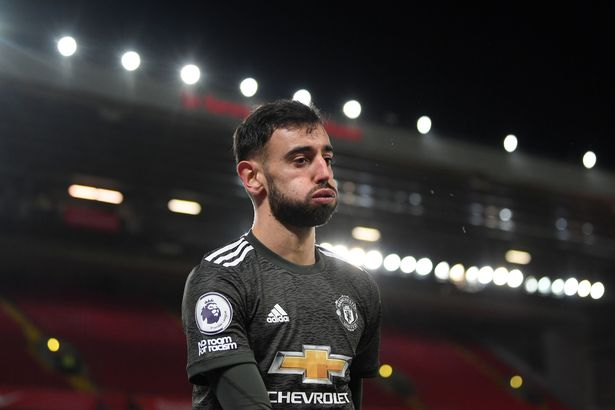 United talisman Fernandes had an off day in the top of the table clash against Liverpool on Sunday before showing his frustration at being substituted.

Rio Ferdinand has defended Bruno Fernandes in light of his disappointing performance against Liverpool, suggesting the Man Utd star should not be subject to criticism.

Fernandes was well below his usual standard during Sunday's 0-0 draw at Anfield, and was eventually substituted by manager Ole Gunner Solskjaer late on.

The midfielder threw a brief strop as he walked from the field and took his place in the stands, but could have little argument given his poor display.

Ex-United captain Roy Keane stated he felt Fernandes "didn't play that well" in a match where he recorded the worst pass completion statistics of any player on the pitch.

But Ferdinand has been quick to provide support for United's talisman, who he feels deserves to be cut some slack.

"[United] looked off but we’re top of the league so I always look at it like that," Ferdinand told Stretford Paddock on YouTube.

"If we played this game and had zero shots on target and we looked like we had no threat at all, then I’d be a little bit concerned.

"But I still think there were moments, it was just the final pass or timing of the pass in the final third maybe a couple of times, and then the finish, they were just a little bit off today.

"But, listen, you can’t talk about [Bruno]. I wouldn’t say Bruno’s looked off recently. The geezer’s output has been phenomenal."

Solskjaer also provided his reasoning for taking Fernandes off, insisting it was as much to give his star man a rest as it was a tactical switch.

"Bruno has obviously been running his socks off for us every single game since he's come," Solskjaer said.