Solskjaer impressed with stats; says United man doing what a full-back should be doing

Ole Gunnar Solskjaer has heaped praise on Luke Shaw for translating his “immense quality” into performances at Manchester United. The 25-y... 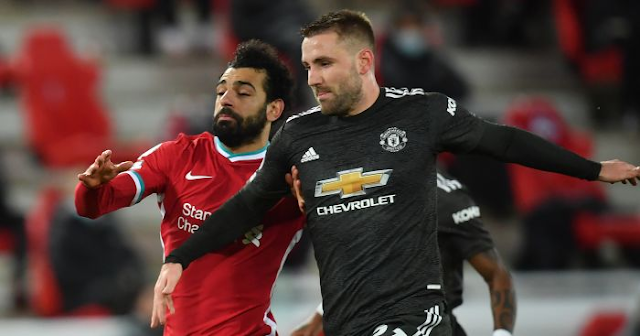 Ole Gunnar Solskjaer has heaped praise on Luke Shaw for translating his “immense quality” into performances at Manchester United.

The 25-year-old has endured a topsy-turvy time since arriving at Old Trafford from Southampton as the world’s most expensive teenager in 2014.

Injuries and a particularly challenging period under Jose Mourinho have restricted Shaw to just 159 appearances at United, but the left-back has looked rejuvenated under renewed pressure for his place.

The eight-cap England international says Alex Telles’ arrival has helped take his game up a level and Solskjaer lauded Shaw following his man-of-the-match display in Sunday’s 0-0 draw against Liverpool.

“Luke has immense quality,” the United boss said. “He has got very good technique, good quality.

“You see the few times against Liverpool he takes the ball and drives forward. It’s something that I’ve pushed him more to do because we know he can do it.

“It’s generally down to the boy himself. He’s mentally very good at the moment.

“He has become a dad, he’s physically very good, his fitness is so much better. He keeps beating his high intensity stats, his total distance stats.

“I think he’s been consistently up there with what a full-back should be doing.

“And when you have the talent of Luke, when that fitness and mental bit is sorted, you are always going to get good performances.”

England manager Gareth Southgate overlooked Shaw for the autumn internationals but said in October that he was “more than capable of being the best left-back in the country.”

Solskjaer said the same last January and has helped bring out the potential that predecessor Mourinho all but wrote off at times.

“It’s about seeing everyone as individuals and human beings,” the Norwegian said ahead of United’s trip to Fulham. “I did spend a lot of time talking to individuals and Luke as well.

“He’s a boy I enjoy talking to. I enjoy trying to help him. He wants to be better and it was about getting him enjoying his football.

“We know his talent, trusting his fitness injury-wise, having players who can back him up so he knows he’s not going to play every single game so he can play at full tilt.

“Both Brandon (Williams) and Alex coming in has given him a little bit of a push to say if you are not performing just tell me, I have good options.”

Shaw is not alone in enjoying an upturn in performances under Solskjaer, with Paul Pogba, Fred and Anthony Martial others to have kicked on since Mourinho’s reign.

“I am probably more honest with them there than what I am with you and you always try to walk out of that room having affected each other,” he said of his conversation with players.

“Even if it’s a smile and walk out in a good mood, or I’ve made them think what they need to do to get back into the team, but individual chats I do really enjoy them, to be honest. I think it’s important.

“I just remember from my time the managers and coaches I’ve had, when they took the time to really see me as a human being – the whole me, my family and everything – that’s a big part of my style.”

But Solskjaer has freely admitted he cannot keep everyone happy given the options at his disposal.

Juan Mata is among those to have found playing time restricted recently and the veteran Spaniard is out of contract this summer unless the club trigger his extension clause.

“The decision is very difficult every time with Juan,” Solskjaer said. “You know he’s got the quality. If he plays, he’s scored goals, he’s contributed this season.

“Then again we’ve had other players who have taken his role as well. Mason (Greenwood) has done well in that position, Paul (Pogba) now.

“Juan really contributes in and around the group. He’s one of those that I have discussions with all the time and it’s difficult to leave him out but unfortunately that’s where it is at the moment. No decision has been made (on his contract) yet.”