Manchester United could reportedly launch a January move to sign Douglas Costa, who could return to Juventus from Bayern Munich this month... 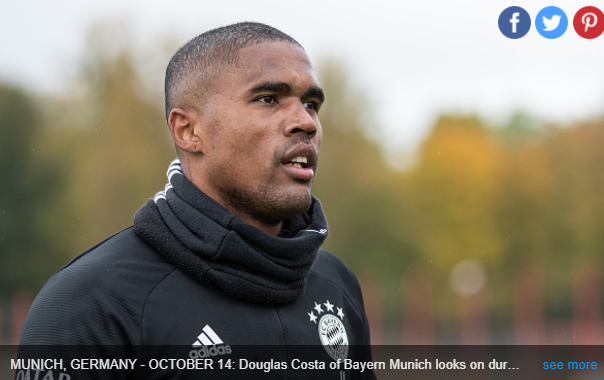 Manchester United could reportedly launch a January move to sign Douglas Costa, who could return to Juventus from Bayern Munich this month.

According to a report by The Sun, Douglas Costa is set to return to Juventus this month to bring an end to his flop of a loan spell with Bayern Munich. And, Manchester United could be set to make a move for the 30-year-old Brazilian winger, with Wolves also showing an interest in him.

Douglas Costa has endured a pendulating club footballing career since first joining Bayern Munich from Shakhtar Donetsk in the summer of 2015. The Brazilian joined Juventus on loan a couple of years later before making the move permanent in the summer of 2018. However, the move did not pan out as envisioned and he returned to Bayern on loan last summer.

The player’s struggles have continued at the Allianz Arena as well, with Costa managing to start just six games till date. It has now emerged that he is surplus to requirements at Bayern, who are ready to terminate his loan deal and send him back to Juventus this month. And, his situation has alerted Manchester United, who could oddly be allowed to sign him.

Costa turned out a couple of times for Juventus before making his way to Bayern, and the rules state that players cannot represent three clubs in a single season. But, Gazetta dello Sport claims that FIFA will allow players to play for a third different club this term given the circumstances borne out of the coronavirus pandemic, thereby bringing Manchester United into the picture.

Manchester United are once again in the market for an immediate solution to their right-wing woes, with Mason Greenwood struggling so far in 2020/21. To that end, it has been suggested that talks over a possible deal for Jadon Sancho are set to reopen soon, although a January move is unlikely.

Apart from Sancho, Gabriel Veron is also on the radar of Manchester United, who have recently confirmed the arrival of Amad Diallo, who could be a long-term solution on the right-wing. Costa, though, might prove to be an option in the here and now, although his inconsistencies might just end up rendering him to be a frustrating figure at Old Trafford.

Apart from Manchester United, Wolves have also been mentioned as possible suitors, although his £100,000-a-week wages might end up scuppering any possible deal. For now, it looks like Costa is set to return to Juventus, and it remains to be seen if United or Wolves end up making a move for him this month.