Edinson Cavani knows what it is like to be part of a team leading the table as Manchester United look to regain top spot following the mid... 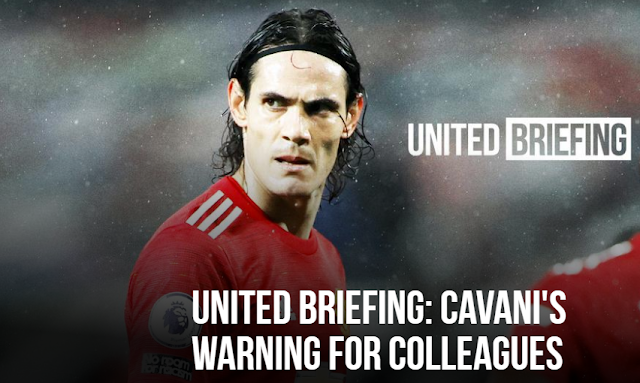 Edinson Cavani knows what it is like to be part of a team leading the table as Manchester United look to regain top spot following the midweek round of Premier League matches.

The experienced Uruguay international was regularly in pole position in France with Paris Saint-Germain and appreciates how it feels when opposing sides raise their game to take on the top team.

Fulham have shown their capabilities in holding Liverpool and Tottenham, and beating Leicester City this term, and were unluckily shaded 1-0 with 10 men against Chelsea last time out, so Wednesday's game at the Craven Cottage is almost certainly going to be a difficult one for the Reds to successfully negotiate, particularly as the top of the table will probably look very different come kick-off time.

Indeed, Leicester moved to the summit with their convincing 2-0 win over Chelsea on Tuesday night.

“I believe that one of the most important things that we need to be aware of, whenever we go into any game, is that we are Manchester United, and, irrespective of whether we are top of the league or in any other position, every other team that plays against Manchester United try to do their absolute best to try and beat them,” he explained to us in an interview that will feature in United Review for the weekend clash with Liverpool in the Emirates FA Cup fourth round.

“It was also a similar situation for me when I was at PSG. Teams try to do the impossible to get a victory against one of the most legendary and best teams in the world. So ensuring we are focused and concentrated on this, should give us the energy to want to fight for this badge.

“And, right now, that we are top of the league, to also want to fight to stay right where we are. For all that, we need to be ready and mentally prepared to compete. Like I always say, the important thing isn’t just winning a couple of games, it’s having that consistency of always competing; competing in every game and for every ball, and concentrating to the absolute maximum for every situation that comes up in the game. And that’s what in the end, allows you to achieve your ultimate goal.“

“As I was saying before, Fulham will know very well that they have Manchester United coming up next, and they’ll be going all out to try and beat us, like they have done in the past and just like what we’ve seen with other teams like Burnley, who always give their utmost.

“So we need to be aware that it’s going to be a tough game and that we have to be 100 per cent focused, in order to take care of all the details so we can try to win the game in order to remain in the league position that we currently occupy.”

Cavani's work-rate has been exceptional since he joined the club and was evident again when he came off the bench in the second half at Liverpool.

The striker will hope to start in the capital tonight (Wednesday) and put in another shift as he feels the defending begins from the front players, who set the tone for the rest of the side.

“Yes, absolutely, as you say, the work starts from the pressing and closing down you do in attack, in order to try to prevent the ball from getting too close to our own area and creating dangerous situations near our goal,” he explained.

“I think it’s a job that the whole team does together as a unit, and I also believe that it’s something we need to do even more of, in order to be able to keep competing hard until the end of the season.“

It's all about tonight's Premier League clash at Fulham, which kicks off at 20:15 GMT, after Manchester City have taken on Aston Villa at the Etihad Stadium. We'll have the best coverage from Craven Cottage on MUTV, ManUtd.com and the Official App.

The all-important team line-ups will be released an hour before the start of the game.

The date is a sad one in our calendar as the legendary Sir Matt Busby sadly passed away on 20 January 1994.