Year Zero: How Cristiano Ronaldo's 2006/07 Manchester United season turned him into the player we know

Cristiano Ronaldo was branded a showpony, then a pariah, as his future at Old Trafford looked to be on the rocks. But in 2006, he strapped... 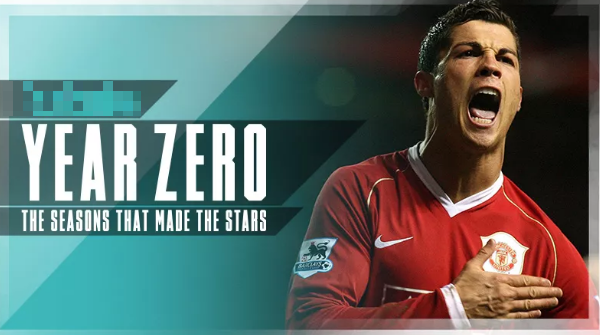 Cristiano Ronaldo was branded a showpony, then a pariah, as his future at Old Trafford looked to be on the rocks. But in 2006, he strapped a rocket launcher to his career. As the Portuguese great turns 35, we look at the season that made him.

“Look at that. Has he just winked then?!”

“Please tell me no,” sighs a weary Alan Hansen.

“I think there’s every chance Wayne Rooney could go back to the Manchester United training ground and stick one on Ronaldo,” huffs Alan Shearer, visibly stiffening in his seat.

True, the United winger had ensured referee Horacio Elizondo saw more than what was probably an accidental meeting of studs and balls, but Ronaldo had only done something beyond most England players’ naivety. Cursèd moral fortitude. 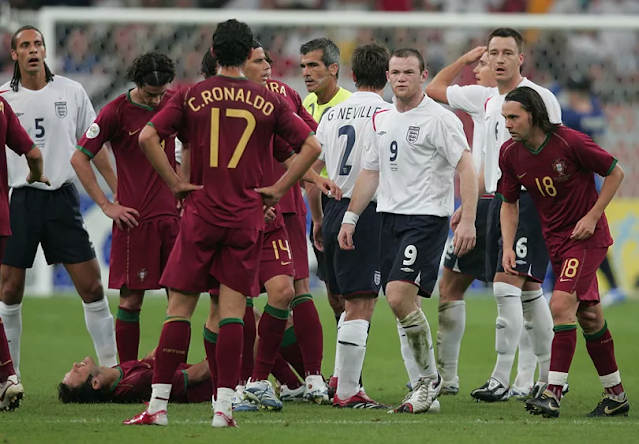 When Ronaldo went on to score the winning penalty in the shoot-out, the fallout was predictable in its bombast.

he Sun quoted an unnamed, definitely not made-up source saying Rooney would “split him in two” when they next met. The same paragon of journalistic integrity also released a Ronaldo dartboard so England fans “could get revenge on football’s biggest winker”. The bullseye was CR7’s right peeper. Obviously.

A week-and-a-half later, Ronaldo had had enough. He'd scored 27 goals in 137 games and won an FA Cup and League Cup from three promising-if-unspectacular Old Trafford seasons characterised by showy step-overs and a frustrating lack of end product. It had been three seasons since United had won the league; Jose Mourinho’s Chelsea juggernaut was the dominant force having won two titles in a row.

“I'm not going to stay at Manchester United,” Ronaldo reportedly huffed to a Portuguese newspaper. “After what happened with Rooney I can't remain there. In a couple of days I will have my future sorted out. I don't want to stay in England.”

From boy to man

That summer of 2006, the media vultures circled, not only for a 21-year-old Ronaldo in the press, but for manager Alex Ferguson too.

"This summer they have been like a pathetic drunk lumbering across a dancefloor at 1.45am, trying to get off with everything that moves," wrote Rob Smyth in The Guardian. "Damien Duff was allowed to slip into the arms of Newcastle for less than United paid for Patrice Evra. You couldn't make it up. You don't have to.

"Take the Cristiano Ronaldo situation: Ferguson said recently that he had not even spoken to Ronaldo since the World Cup, a dereliction of duty that is in total contrast to the us-against-the-world protection that he gave to David Beckham – and for which, for a time, he was so thrillingly rewarded – in 1998."

Yet, Ferguson didn’t need to, because Rooney – possibly at his manager’s behest – had already done so. After speaking to Ronaldo in the tunnel in Gelsenkirchen, Rooney rang his club team-mate repeatedly over the summer to confirm there would be no hard feelings come pre-season. The future Manchester United and England captain even suggested a joint interview. 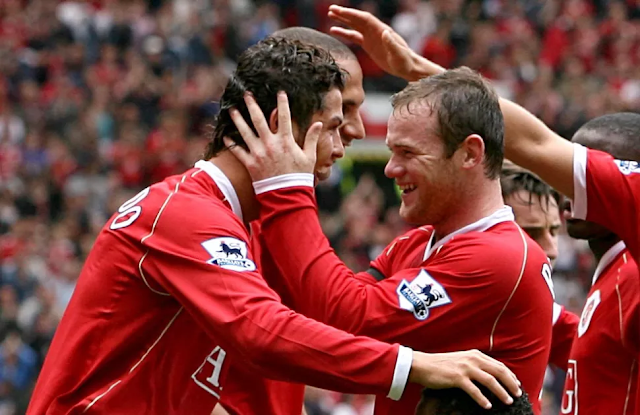 The biggest surprise on the first day of training was less whether Ronaldo would show up – he had, after all, swapped shirts with Gary Neville at the World Cup – but the state he was in at Carrington.

“Physically, he changed from a boy to a man,” Neville later recalled. “He left as a featherweight and returned as a light-heavyweight. That brought him a level of power he didn’t have before.”

Rooney agreed, noting that Ronaldo came back looking like “he’d been on the weights all summer”. The difference between how Rooney himself frequently returned from the off-season – overweight and out of shape, much to Ferguson’s eternal frustration – couldn’t be starker.

Rumours of Ronaldo’s exit persisted – Valencia president Juan Soler at one point said, “until they tell us no several times, we won’t give up” – as did opposition supporter antipathy to the Portuguese. Yet the season began well for Manchester United with a 5-1 home shellacking of Chris Coleman’s Fulham.

From a right-wing starting position, Ronaldo scored a fine back-post half-volley and was a constant menace to Cottager left-back Franck Queudrue.

“You could tell he and Wayne are the best of pals,” beamed Fergie at full-time. “People always look for scapegoats but we have a great spirit here and we will not let that be affected by what people say outside the club. The Fulham fans did boo Cristiano a bit at the start but in the end, even they were acknowledging what a great footballer the boy is.” 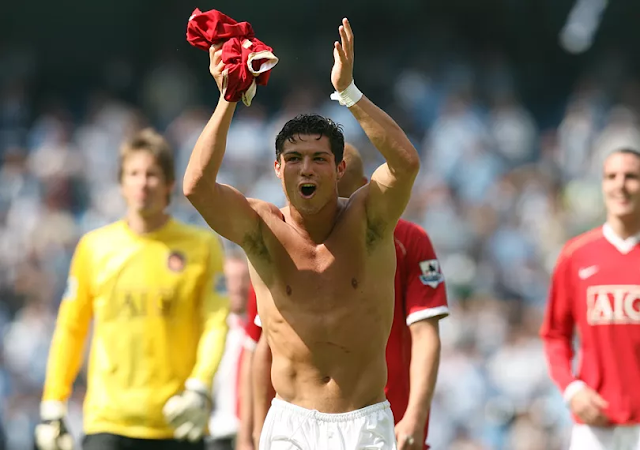 Ferguson may have been playing fast and loose with the truth – any boos were restricted mainly to set-pieces, the final-whistle cheers barely registering – but the United boss was determined to ensure that Ronaldo knew the club wanted him.

For the following month, the boos were more audible, especially away from Old Trafford. By September 23, Ronaldo had only flickered, the constant jeers seemingly weighing him down, but that changed in a 1-1 draw at Reading.

United’s relentless attacks to cancel out Kevin Doyle’s 48th-minute penalty were met with doughty resistance until Ronaldo – having switched wings to the left – picked up the ball. Then, cutting inside Reading right-back Graeme Murty, he smashed a shot past Marcus Hahnemann to secure a draw.

"You've got no chance because he can go both ways, flick it over your head, nutmeg you and just start laughing," captain Murty said.

"You can't get too close, because he's so rapid. All I could feel was the wind as he rushed past. And he's a brute, as well. He's big and strong, and tackling him is like running into a brick wall."

Gone was the talented but fragile waif that had so bewitched in a half-hour debut cameo against Bolton in August 2003. Slowly, Ronaldo was discovering that it was goals, not step-overs, that win games.

Even Ferguson, his continual apologist, agreed recalling those early seasons as “the wee show-off who was desperate to convince everyone how good he was”.

By November, the penny had dropped. Beginning with a devilish free-kick against Portsmouth (no, not that one) Ronaldo lit up the league, the boos a thing of the past. Further man-of-the-match displays followed at Chelsea and Everton, as did the Premiership’s Player of the Month award.

“When he came to Manchester United, he was a show pony,” centre-back Rio Ferdinand later recalled. “He wanted to do skills, he wanted to show people how good he was and take people on, take the mickey out of full-backs.

“Then he realised it was about end product and to become the best player in the world it would be all about purely scoring goals, or setting goals up for others and having an impact on games. He forced himself to become that guy.”

For perhaps the first time in his United career, Ronaldo backed up performance after performance. If November served notice of a potential being realised, December was its explosion.

Beginning with a goal and an assist in the Manchester derby, Ronaldo scored three successive braces over the Christmas period against Aston Villa, Wigan and Reading to send United top. The Portuguese again received the Player of the Month crown, becoming only the third player (after Dennis Bergkamp and Robbie Fowler) to win the award in consecutive months.

For 2006/07, with Ferguson having refused to take his winnings every year, Ronaldo raised the stakes to £400 and won his bet by February.

His 15th goal of the season came with the 87th-minute winner in a 2-1 come-from-behind victory at Fulham. It was a carbon copy of the goal he had scored against Reading earlier in the season, cutting inside from the left before hitting across a helpless keeper. This time, it was Ronaldo who refused to accept Ferguson’s money.

In April, the European floodgates opened at last. His brace in the Champions League last eight in a 7-1 home win against Roma were his first goals in his 27th appearance in the competition. He has scored 101 in the 115 games since that day.

The following month, Ronaldo scored his 50th United goal, a penalty against Manchester City to all but secure the title. The following day, Mourinho’s Chelsea failed to beat Arsenal and the the player’s first English league championship was secured.

Though United lost to the Special One’s Blues in the FA Cup final, Ronaldo had definitively arrived, his dazzlingly consistent displays – and 23 goals in all competitions – earning him all four individual awards available from the league. 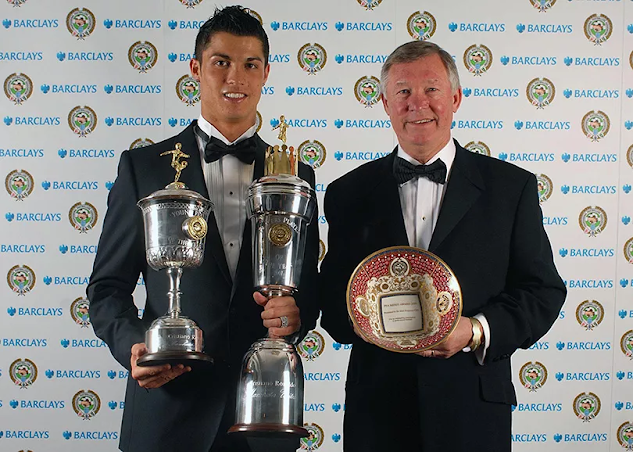 Start of something big

Despite the settled bets, trophy and individual plaudits, however, still Ronaldo 2.0 wasn’t satisfied. This season had just been the start. At the beginning of 2007, Rene Meulensteen returned to Old Trafford after an unsuccessful six-month period managing Brondby. Few coaches cut Ronaldo to the core as much as the technical skills coach.

“Cristiano,” Meulensteen said as the season came to a close, “I’ve looked at your goals last season, and you only scored 23 because you want to score the perfect goal all the time. ‘Look at me! Top corner!’ The most important individuals are the ones who elevate the team, not themselves. You think it’s the other way round. No, no, no. Elevate the team and the team will then elevate you.”

The pair worked incessantly, studying videos of Alan Shearer and Thierry Henry to improve his output ever further. Working on three zones – No.1: in front of goal, No.2: either side, No.3: outside the area – Ronaldo became deadly. Who says goalscorers are born, not made?

Meulensteen asked Ronaldo how many he thought he could score in 2007/08? Between 30 and 35 came the reply. “I think you can score 40,” deadpanned Meulensteen.

By June 2008, Ronaldo had won another league title, the Champions League and scored 42 times. In the nine seasons since then for both United and Real Madrid, he has scored more than 40 goals in seven of them.

“When he was at United, between 2006 and 2008, I still maintain that’s his best two football years as a football player, in terms of his contribution through the whole game,” Gary Neville said recently.

“Since he’s gone to Real Madrid he’s contributed enormously to everything they’ve done but he’s living more off moments rather than a contribution through a whole 90 minutes.”

Still, not bad for someone who began his first great season as the world’s biggest winker.