The forward scored a sublime effort against the Cottagers to help the Foxes return to winning ways and has been praised for the performanc... 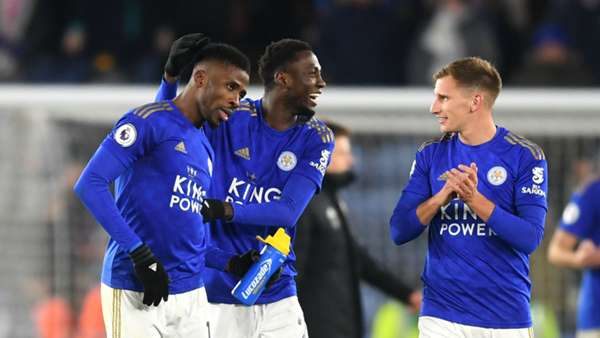 The Nigeria international put the King Power Stadium outfit in front with a fine header after a timely cross from James Maddison.

The striker, thus, ended his 15-game Premier League drought , having last found the back of the net in the division in July 2020.

James Justin sealed the victory as the Foxes secured all three points in the encounter and returned to winning ways after losing against Leeds United last time out.

Hargreaves has showered encomium on the centre-forward for his well-taken strike at Craven Cottage, describing it as a dream goal.

"What a ball from James Maddison, he puts it on a plate for Iheanacho," Hargreaves told Premier League Production.

“To be fair, Iheanacho adjusts absolutely brilliantly. This goal is a dream, Iheanacho with a lovely turn and then the rest of it is a dream."

The victory moved Leicester to the third spot on the Premier League table after gathering 42 points from 22 games, behind leaders Manchester City and Manchester United.

Iheanacho has now scored four goals and provided four assists in 20 appearances across all competitions this season and has spoken of his desire to continue to seize the opportunities that come his way.

"I’m always working in training. I need to work really hard to get my chance,” Iheanacho told the club website.

“Sometimes, the gaffer switches the team around, so I need to work for my chance. When it comes, I need to take it and that’s what I did tonight.”

Iheanacho will hope to continue his impressive performance when Leicester City take on Wolverhampton Wanderers in their next Premier League outing on Sunday.

The forward remains a significant member of the Nigeria national team and will be expected to feature in the Super Eagles 2022 Africa Cup of Nations qualifiers in March.