Edinson Cavani reveals he doesn't give out advice but instead 'prefers to support and be there for help' because he's not fan of having things imposed on him... as Man United striker aids Rashford, Greenwood and Co

Edinson Cavani revealed he doesn't like to give out advice at Manchester United But the striker is keen to support his team-mates and le... 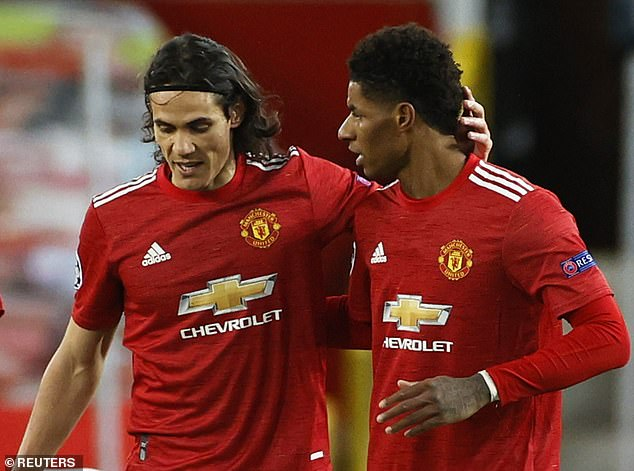 Edinson Cavani revealed he is happy to support his younger team-mates at Manchester United, but won't force any advice on them.

Mason Greenwood recently spoke of how much he values having Cavani to learn from, and the veteran striker's move to Manchester has so far been a successful one.

The Uruguayan's six league goals this season make him United's third top scorer, behind Bruno Fernandes and Marcus Rashford, but Cavani's role at the club extends beyond just finding the back of the net on the pitch.

'As someone who is a bit older, there are things that you notice that maybe they, as younger players don't quite see yet,' Cavani told ManUtd.com.

'Just normal everyday football things. I'm here to give the best I can give of myself and to occasionally offer my opinion on things.

'Honestly speaking, I don't really like to just give out advice. I prefer to support and be there to help.

'I like to give my best. If someone would like to take something on board as an example, something that I've done, then yes, by all means.

Alongside Cavani, Ole Gunnar Solskjaer has an array of attacking talent at his disposal, and United are currently the top scorers in the Premier league.

And the striker believes that the work done on the training pitch can be crucial in aiding the younger players at the club.

'I'm here to do my absolute best and to accompany and support this team. I'm here to leave everything I have out on the field - not just in a game, but in training too,' Cavani said.

'Then, if a young player comes up and asks me something, or a youngster sees things during a training session that they'd like to incorporate into their game, I'm always here to help.

'I don't like it when people try to impose things on me or tell me what I have to do.'

'I'll be there to offer support and I'll do my best with it. If they want to take it on board and take it as an example, I'd be happy.

Cavani joined United in October on a one-year deal, though there is the option for his spell in Manchester to be extended for a further year and it looks likely that may be the case.

It is certainly not the first time United have signed a big-name player late in their career, but the striker, who recently turned 34, has made an impressive impact.

His first major impression at the club came back in November, when he came off the bench to score twice and inspire his side to come form behind and win 3-2 away at Southampton.

The Uruguayan has three goals in his last five starts in the Premier League, and has increasingly cemented himself in the first team after initially being restricted to substitute appearances.