United laboured past West Brom in their last meeting Manchester United have only won one of their last four Premier League games to hand c...

Manchester United have only won one of their last four Premier League games to hand control at the top of the table to Manchester City. That the sole victory was a record-equalling 9-0 win against Southampton is almost irrelevant because Ole Gunnar Solskjaer’s side didn’t win the other games.

Before City, who have a five-point lead and a game in hand, get out of sight, United desperately need to start winning. Not least because the race for the top four is heating up behind them.

Home defeat against Sheffield United should have been an isolated blip. But a 0-0 draw with Arsenal was frustrating and the team threw away victory against Everton, first relinquishing a 2-0 lead and then still failing to close the game out after going 3-2 ahead.

But at The Hawthorns on Sunday, West Brom are so awful that it wouldn’t be unreasonable to expect a football version of the St Valentine’s Day Massacre.

West Brom’s defence is so full of holes that they haven’t kept a clean sheet since 28 November, while they have conceded at least two goals in each of their last nine games in all competitions – that includes two against League One’s Blackpool in the FA Cup.

And yet, can United actually take advantage against an objectively very poor team?

The reverse fixture earlier in the season was decided solely by a re-taken Bruno Fernandes penalty in the second half that had been saved by Baggies goalkeeper Sam Johnstone at the first attempt. Bizarrely, it was United’s overdue first Premier League home win of the season.

Despite a recent loss of momentum, Solskjaer’s team is much better than it was. West Brom, meanwhile have become so much worse since then. Sam Allardyce has actually taken fewer average points per game than predecessor Slaven Bilic and most definitely hasn’t improved the defence.

West Brom is prime banana skin territory because it should be so one-sided. There is no room for complacency. United just have to make sure they turn up and get the job done - and by done, that means they should be comprehensive winners by a comfortable margin. 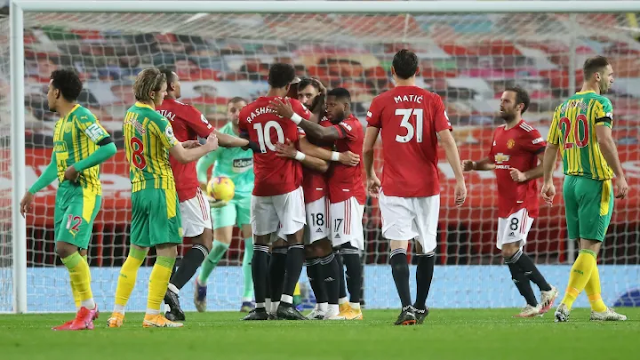