Edinson Cavani was sent off in Uruguay's World Cup qualifying defeat by Brazil last year after a challenge on Everton's Richarliso... 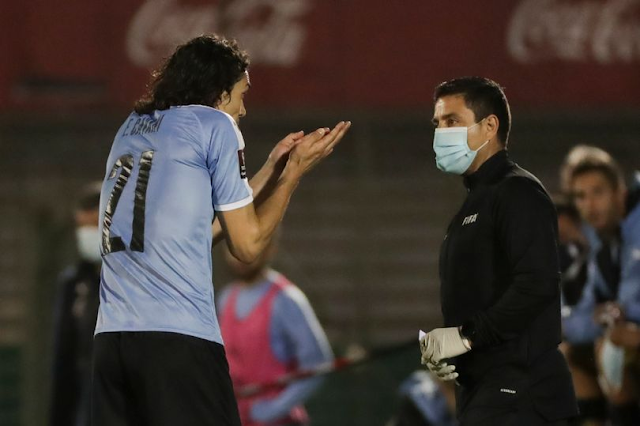 Edinson Cavani was sent off in Uruguay's World Cup qualifying defeat by Brazil last year after a challenge on Everton's Richarlison.

Manchester United striker Edinson Cavani will miss Uruguay's upcoming games against Argentina and Bolivia after he landed a two-match ban for a challenge on Richarlison last year.

Playing for Uruguay against Brazil in a World Cup qualifier, Cavani was dismissed following a mistimed tackle in the 71st minute.

Uruguay went on to lose the qualifier 2-0, while Richarlison said after the fact that Cavani could have caused major damage with the tackle.

"I think it was a ball dispute, he went over the top," Richarlison said. "If my foot was stuck it might have even broken my ankle, but I think it wasn’t bad. He tried to steal the ball and ended up missing."

Former United player Gary Neville praised Cavani last weekend for the impact he has had since moving to United on a free transfer from PSG.

Neville told Sky Sports: "I was a little bit nervous, obviously with the last minute nature of the signing, it’s sort of a little bit reminiscent of the signings that have gone wrong for United over the years, but I have to say, he’s been a revelation.

"His attitude, which was the only real question about him because his ability is fantastic, has been spot on. His out of possession work is far better than Martial, Rashford and Greenwood, I think they’ve got a lot to learn, those young players, about the way he operates when Manchester United don’t have the ball.

"Ultimately, those young three haven’t grabbed that number nine spot. He’s come from the bench to start with and made an impact, and his movement is better, his out of possession work is better, his experience is good and he looks more physical up front when he’s there.

"He really has done brilliantly for United in this last month or so."