The Chelsea lineup that should start against Sheffield United

Chelsea celebrate going 1-0 at Tottenham | Pool/Getty Images Thomas Tuchel oversees his fourth game at the helm of Chelsea as he takes his...

Thomas Tuchel oversees his fourth game at the helm of Chelsea as he takes his side to Bramall Lane to take on Sheffield United.

The hosts are still stuck at the foot of the Premier League table, but look more confident having won three of their last five league games. Recently, Chris Wilder's men have, most notably, shocked Manchester United at Old Trafford, before narrowly losing to Manchester City and beating relegation rivals West Brom last time out.

Chelsea also go into the game in good form since the appointment of Tuchel. A very drab 0-0 draw kicked off his reign, but Tuchel has seen his players win twice on the bounce against Burnley and Tottenham, and they are yet to concede a goal under the German.

Here's the team that could start to continue their good run.

Edouard Mendy (GK) - The Senegalese has maintained his number one status under Tuchel, and will certainly start on Sunday night.

Cesar Azpilicueta (CB) - Has performed brilliantly of late and seems to be thriving since the arrival of the new manager. A guaranteed starter on the right of a back three.
Andreas Christensen (CB) - Thiago Silva picked up a knock against Spurs, so the Dane looks in line for his seventh league outing of the season.

Jorginho (CM) - The Italian is another player who has come into the side under Tuchel, and he appears to be revelling in his deep-lying playmaker role. Scored the recent winner against Spurs from the penalty spot.

N'Golo Kante (CM) - Rotation may be the key to keeping Chelsea's good running, so N'Golo Kante may get the opportunity to secure his first start under Tuchel at the expense of Mateo Kovacic.

Ben Chilwell (LWB) - Marcos Alonso has done exceptionally well since coming back into the side, but again his lacking sustained minutes in the legs. That could allow Chilwell the chance to wrestle his place back.

Callum Hudson-Odoi (RF) - Tuchel seems to be getting the best out of Hudson-Odoi, and his good form could continue to keep Christian Pulisic and Hakim Ziyech on the sidelines.

Mason Mount (CF) - A regular starter under Lampard and now Tuchel, Mount was superb against Tottenham - dropping deep centrally and operating as a false nine. His creativity and intelligence keep Chelsea ticking.

Timo Werner (LF) - Has just one goal in his last 18 Chelsea appearances, but does look to be gaining in confidence under Tuchel. Desperately needs a goal. 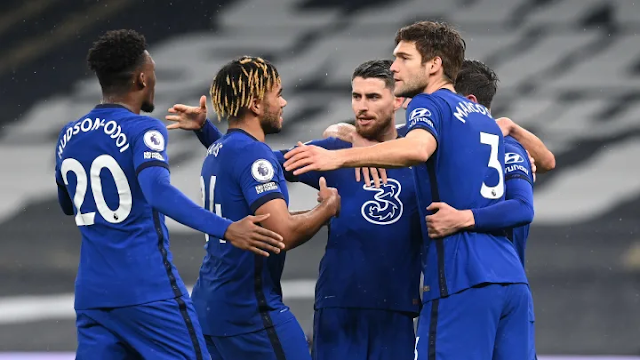