Man Utd are looking to secure a spot in the semi-finals of the FA Cup and Leicester stand in their way. Manchester United fans want to see... 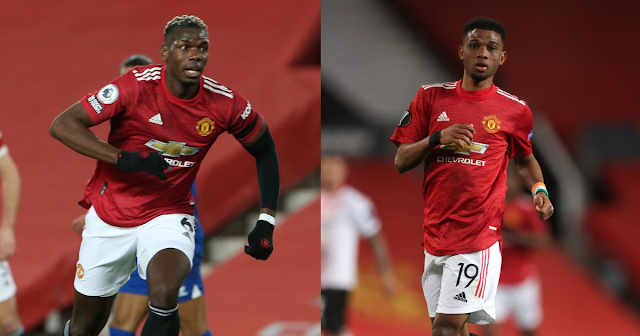 Man Utd are looking to secure a spot in the semi-finals of the FA Cup and Leicester stand in their way.

Manchester United fans want to see Amad handed his full debut against Leicester City as one of two changes to the side for this evening's game.

United head to the King Power Stadium for an FA Cup quarter-final tie, three days on from beating AC Milan in the Europa League.

That 1-0 win at the San Siro set up a last-eight clash against Granada, thanks to Paul Pogba's winner.

The Frenchman made his return from injury against the Serie A side, entering the fray as a half-time substitute and United fans want to see him back in the starting XI against Leicester.

David de Gea is available again but Dean Henderson gets the nod in goal from United supporters, with an unchanged defence consisting of Aaron Wan-Bissaka, Victor Lindelof, Harry Maguire and the in-form Luke Shaw.

Fred makes way for Pogba, who partners Scott McTominay in midfield, with Bruno Fernandes operating in his usual number 10 position.

Marcus Rashford is a major doubt for the match, while Anthony Martial and Edinson Cavani missed out against Milan, so Amad comes into the front three.

The 19-year-old is yet to start for United but did score as a substitute against Milan at Old Trafford.

He joins Daniel James in support of Mason Greenwood, who continues as a central striker.

On Rashford's prospects of making the game against Leicester, Solskjaer said: "With Marcus, I don't really know, I can't say.

"I hope, but most unlikely that he'll be fit, but I hope so. As you said, it's just an hour or so since the end of the game so we haven't really got to the bottom of it.

"With Edinson [Cavani], he has worked really hard, he's joined in training sessions and towards the end, he needs to top it up to feel 100 per cent ready for the game and hasn't really got there yet.

"It's down to him, he wants to be 100 per cent when he joins in, he doesn't want to come in and look off the pace. Hopefully, he can be ready for Sunday but I'm not sure, either, because after training yesterday he felt something and couldn't train with us."