Manchester United could use Donny van de Beek in a swap deal with Borussia Dortmund when the transfer window reopens this summer. Manchest... 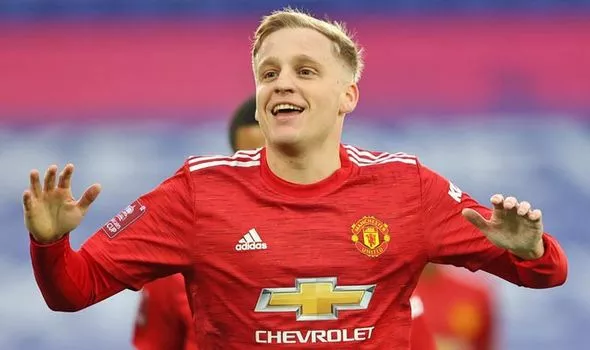 Manchester United could use Donny van de Beek in a swap deal with Borussia Dortmund when the transfer window reopens this summer.

Manchester United star Donny van de Beek has struggled since moving to Old Trafford. And, now, reports claim the Netherlands international could be used in a swap deal with Borussia Dortmund. The Bundesliga giants are open to landing the midfielder, who is currently below Bruno Fernandes in Ole Gunnar Solskjaer’s pecking order.

Manchester United signed Van de Beek from Ajax back in the summer transfer window after being priced out of a deal for Jack Grealish, who was Solskjaer’s preferred target.

But the Dutchman has struggled at the club in the short time since his arrival.

Van de Beek did register an assist for United against Leicester on Sunday but, that aside, toiled at the King Power Stadium.

And, now, 90min claim United are ready to go use him in a swap deal for Borussia Dortmund.

Erling Haaland is Solskjaer’s top transfer target at the current moment in time, especially with Anthony Martial and Mason Greenwood misfiring this term.

The club are also at risk of losing Edinson Cavani, who has been linked with a move to Boca Juniors after recent comments made by his father suggesting he was unhappy in the Premier League.

And United could use Van de Beek as bait.

They’re also still interested in Jadon Sancho, despite Borussia Dortmund pricing them out of a move for the England international back in the summer.

And United are admirers of Manuel Akanji, who has impressed at the back for the Bundesliga giants this term.

Solskjaer isn’t desperate to get rid of Van de Beek but there’s a feeling behind the scenes that a move away from Old Trafford could benefit the 23-year-old.

And Dortmund would be happy with a swap deal involving the Dutchman, who is valued at £40m still despite his struggles.

Hughes told Stadium Astro: “Clearly it’s difficult, he hasn’t had enough game time and you can see that in his play.

“He’s wandering and not really getting on the ball, doesn’t know how to affect the game, can’t demand the ball of his team-mates because they’re not quite sure whether or not they have enough confidence in him.

“He looks like a guy who’s wandering around lost on the field. Okay, some of that responsibility he has to take on himself, he has be more demonstrative, he has to be a key player.

“He’s a big-money signing he’s come from a big club in Ajax so he’s used to being a top player of influence.

“But clearly, since he’s come to United he hasn’t shown anything like what the level he needs to be at to remain a Man United player.

“He can only have so many opportunities, at some point he’s going to have to take them or United will move him on.

“I think they’re edging towards that decision if he’s not careful.”

Regarding Haaland, Solskjaer recently opened up on his compatriot.

He previously managed the Dortmund star at Molde, helping to shape him into the superstar he is today.

And Solskjaer said: “It is clear that Erling is going to have a fantastic career.

“I follow Erling. I have always said that. Was it 18 months we had together or something like that?

“Almost two years, perhaps. A fantastic time. He will surely have a super career both for Norway and his club. He is doing incredibly well for Dortmund.

“We will see where he ends up. As a Norwegian and someone who has worked with him, it is of course great that he is doing so well.”