The Blues continued their unbeaten run with a 0-0 draw against Leeds and saw some of their rivals falter this weekend Chelsea could only m... 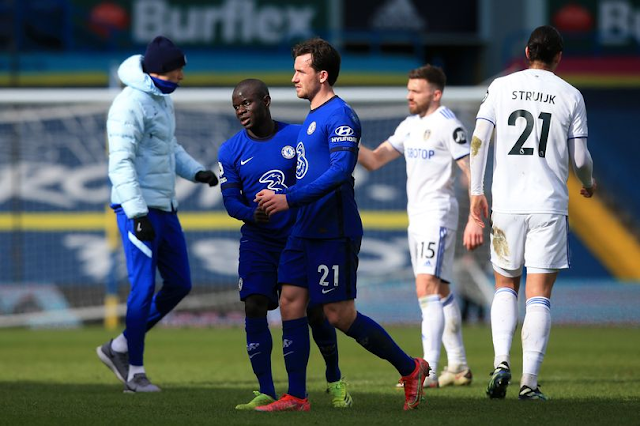 Chelsea could only manage a point away at Leeds United on Saturday but that turned out to be a gain on some of their rivals below them as the top four race heated up at the weekend.

The Blues were held to a third goalless draw since Tuchel arrived after drawing a blank in Yorkshire but defeats for West Ham, Everton and Tottenham this weekend eased any slight annoyance at not taking all three points on Saturday.

Manchester United and Leicester both secured victories on Sunday however and the Blues are now four points behind the Foxes and six behind the Reds, with Man City cantering away at the top of the tree.

The Blues have a break from Premier League action this week as they take on Atletico Madrid on Wednesday in the Champions League at Stamford Bridge and are then in FA Cup action this weekend against Sheffield United in the capital. The Hammers play their game in hand over Chelsea on Sunday when they host Arsenal at Stratford.

The Blues have a favourable run of games coming up in the league as they continue to battle for a top four finish and secure Champions League football for mnext season, the big requirement given to Tuchel when he replaced Frank Lampard at the helm in late January.

So how to the fixtures for all the contenders stack up?

Chelsea face struggling West Brom and Brighton in two of their next three games but have a tricky away agme at Crystal Palace sandwiched in between those two.

The trip to West Ham on April 24 could be a defining match for both sides before what looks like a very tough end to the campaign for Tuchel and his players.

They need to make the most of the upcoming three games in the league to tighten their grip on a top four spot.

The Reds saw off West Ham 1-0 at Old Trafford on Sunday night to give themselves another two points on Chelsea after the visitors to Leeds dropped points.

United take their unbeaten away record to Brighton next in the league after their FA Cup quarter final at Leicester this weekend and then the international break.

Three straight wins in the league had seen Carlo Ancelotti’s side firmly put themselves in the equation for the top four but they have lost their last two, one of them to Chelsea, to hit a bump in the road.

The Toffess need to reschedule a visit to Aston Villa in the not too distant future and have a big game on April 3 at Crystal Palace to get themselves back on the wagon and back into the top four race.

Brendan Rodgers’ men swatted aside Sheffield United 5-0 on Sunday to gain a couple of points over Chelsea and remain third in the standings behind the two Manchester clubs.

The Foxes have a brutal end to the campaign as they will play Man Utd, Chelsea and Spurs in their final three matches.

Picking up points against West Brom, Crystal Palace, Southampton and Newcastle in April and May will be crucial to their hopes of a top four finish.