Manchester United midfielder Donny van de Beek admits the side are ‘hurting’ after their FA Cup exit to Leicester but insists the squad will ‘come back stronger’. The Dutchman was given a rare start as the Foxes booked their place in the last four of the competition with a resounding 3-1 win against the Red Devils at the King Power stadium. Van de Beek has missed the last six weeks through injury and he played a part in Mason Greenwood’s equaliser, providing a smart dummy in order for the teenager to smash past Kasper Schmeichel. However, it was another below-par performance from the £40million ex-Ajax midfielder and he was replaced with 25 minutes to go by Bruno Fernandes.

United conceded another following Van de Beek’s departure and the Dutchman admits the side are ‘hurting’ after their exit from the competition.

We are all hurting. We will come back stronger. 💪🔴 pic.twitter.com/hZbnJ50At9

Taking to Twitter today, Van de Beek said: ‘We are all hurting. We will come back stronger.’

As much as anything, United’s exit means Van de Beek’s chances of game time will be further reduced. The Netherlands international has started just three matches in the Premier League, with Ole Gunnar Solskjaer reserving him for cup competitions.

United looked shattered after their exploits against AC Milan on Thursday and the Europa League is now the club’s only chance of silverware this term. Solskjaer challenged his side following their exit to Leicester to win the competition and to finish second in the Premier League. ‘We’ve got the Europa League and Premier League to concentrate on,’ said Solskjaer.

‘Yes we would’ve liked to go to Wembley but now all the focus is on the games we do have. ‘We’re in a good position in the league and we want to keep improving, of course Leicester are just behind us so it won’t be easy but we want to keep going and get as far as possible in the Europa as well. 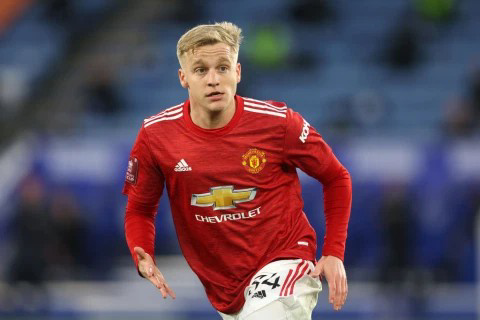