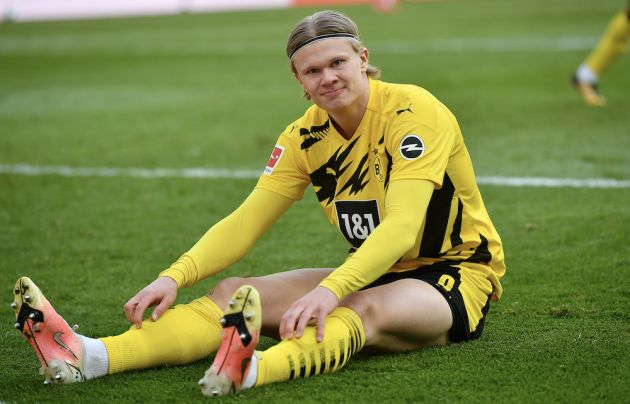 Haaland, 20, has enjoyed one of the most stunning rises in football – Ever.

Since joining Borussia Dortmund just over a year ago following a £18m move from RB Salzburg, Haaland has grown to become one of Europe’s most prolific strikers.

After featuring in 49 matches for the Black and Yellows, the talented Norweigan has racked up an eye-watering 49 goals and 11 assists, in all competitions.

The young striker’s stunning form has seen him draw links to some of Europe’s biggest clubs, including Manchester United, Real Madrid and Barcelona.

With a new story, virtually every day, speculating where Haaland may end up next, the 20-year-old’s long-term future remains a constant source of uncertainty.

However, speaking recently, Haaland has addressed the relenting rumours and insisted he remains fully committed to his German side.

“I still have a three-year contract with Dortmund and I am not disturbed by rumours,” Haaland told Diario Sport (as relayed by Football Espana).

Despite the Norweigan’s no-nonsense statement, it’s almost a given that it’ll do very little to ease the speculation he could move on in a matter of months, once the summer transfer window opens.