Manchester United have made Erling Haaland their top target in the summer transfer window despite the huge costs involved Erling Haaland&#... 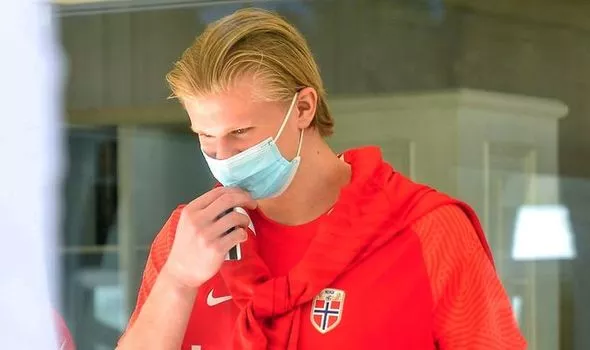 Haaland won't come cheap - either in terms of a potential nine-figure transfer fee or indeed the salary the Borussia Dortmund star is expected to seek.

The 20-year-old's stock has risen sharply since he joined Dortmund from Red Bull Salzburg for £18million in January last year, with the striker having scored an incredible 49 goals in as many games for the Bundesliga club.

And with Chelsea, Manchester City, Real Madrid and Barcelona also keen on Haaland, he is demanding a whopping paypacket of £350,000 per week.

That's according to the Manchester Evening News, which claims United have made the Leeds-born striker their top priority despite the huge costs involved.

The publication says Murtough, who took charge of United's recruitment department earlier this month, shares Solskjaer's view that Haaland is the centre-forward the club have been looking for since Lukaku was sold to Inter Milan in 2019.

The Red Devils manager wanted to sign Haaland last January after he starred for Salzburg in the January group stages, but United walked away from the deal, blaming the demands of the player's agent, Mino Raiola.

Harry Kane is also on United's radar, and the Tottenham star is reportedly open to a switch to Old Trafford.

But Solskjaer has previously managed Haaland at Norwegian club Molde - and there is hope that the relationship between the two can lead to United beating their rivals to his signature.

Earlier this month, the manager revealed he is still in contact with Haaland, saying: "When you have had kids and players through as a coach, you follow them and I keep in touch with Erling.

"It's great to see him become the player he has become and I know he'll work to improve all the time.

"He's a Dortmund player and we just wish him well there and let's see what life will bring later on.

"Who wasn't interested in him a year ago? Everyone would say you take the best players in the world. Erling is a top player."

United have been tipped to sell Anthony Martial this summer with the French forward having struggled to convince this season.

And there is uncertainty over whether Edinson Cavani will stay for another season amid reports linking the former PSG star with a move back to South America.

Solskjaer needs a younger centre-forward who can lead his forward line for years to come, backed up by the likes of Marcus Rashford, Mason Greenwood and Amad.