Man Utd had to rely on a stroke of luck to edge a cagey contest with West Ham that strengthened their grip on the Champions League qualifi... 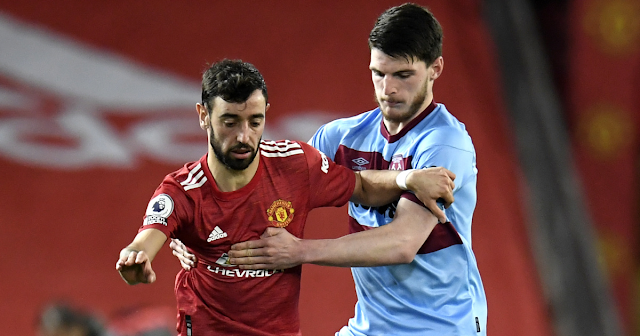 Man Utd had to rely on a stroke of luck to edge a cagey contest with West Ham that strengthened their grip on the Champions League qualification places.

Despite pre-match promise of an entertaining affair, both sides opted for a cautious opening gambit in the first 15 minutes.

Declan Rice had West Ham hearts in mouths after appearing to suffer an injury during a tussle with Scott McTominay. The England international was able to run the knock off, however, averting the need for an early change.

Man Utd clicked into gear in the 25th minute after Mason Greenwood caused havoc down the right.

The youngster cut inside before whipping an inch-perfect ball onto the head of Marcus Rashford. The England forward had showed excellent movement to evade his marker, but couldn’t find the desire contact on his header to trouble Lukasz Fabianski.

The Polish stopper was called into moments later when the lively Greenwood left Craig Dawson tangled in knots.

Greenwood curled a low effort towards the far corner, but Fabianski got down quickly to steer the ball onto the post.

Man Utd finally made the breakthrough soon after the interval in fortunate circumstances.

Bruno Fernandes’ corner was flicked on by McTominay directly at Craig Dawson. The centre-half could do littleas the ball cannoned off him and beyond Fabianski from close range.

The hosts were finding more space in the final third as West Ham began to open up. Fernandes stung the palms of Fabianski from distance as the likelihood of a second goal in the contest rapidly grew.

Though their top four hopes were potentially hanging in the balance, the Hammers failed to produce their best as the game wound down.

Time would ultimately defeat them as Man Utd emerged victorious via a 1-0 scoreline in a game that won’t live long in the memory.