The snobbery towards Martin O’Neill’s Leicester meant that this glorious team goal was criminally underappreciated. T here are no Pepsi Ch... 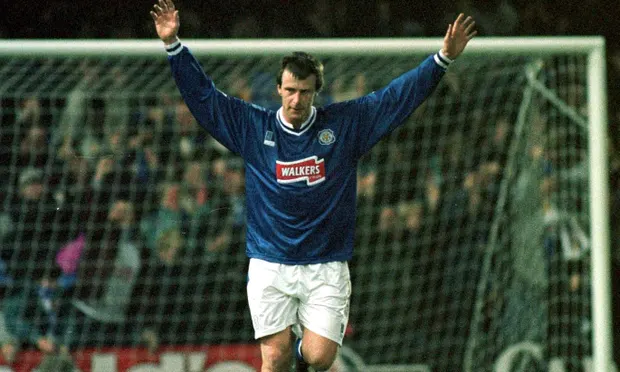 The snobbery towards Martin O’Neill’s Leicester meant that this glorious team goal was criminally underappreciated.

There are no Pepsi Challenges in football, and not only because Coca-Cola have hoovered® up most of the official soft-drink partnerships. You can’t do a blind test when the only useful sense is sight. Everything we watch – goals, assists, cock-ups, bad tackles – is judged through our knowledge and perception of those involved. He’s not that kind of player, is he?

At times, this is a good thing. When Gheorghe Hagi scores from the touchline, we’re more likely to appreciate it was deliberate than if [insert name of old-school right-back here] does the same. But at others it elicits a prejudice that is both unfair and, let’s be honest, a little pathetic.

Exhibit A: Steve Claridge and Emile Heskey’s impromptu collaboration against Manchester United in the Coca-Cola Cup in 1996. It is an extraordinary goal – elegant, classy and devastatingly incisive. Had it been scored by modern-day Liverpool or Manchester City, it would be replayed forever. As it is, the goal doesn’t even have its own YouTube video; you have to search to find it in a compilation of Claridge’s best goals for Leicester, or go trawling through their 1996-97 season review.

It’s not just a forgotten great goal; it’s a goal that wasn’t properly appreciated in the first place.

In his short spell at Leicester, Claridge scored two goals whose importance made them far more enduring. He made time stand still at Wembley in the 120th minute of the 1996 play-off final and then scored the winner in the Coca-Cola Cup final against Middlesbrough a year later. They were two of Leicester’s biggest highs in an extraordinary spell under Martin O’Neill from 1995-2000.

When O’Neill took over, Leicester had not won a trophy since 1964. Claridge says the victory over Manchester United in the last 16 of the Coca-Cola Cup was the first time they began to believe they could win the competition. It was a weakened United side though it still included Roy Keane, Paul Scholes, Karel Poborsky, Jordi Cruyff, Brian McClair and David May.

Claridge’s goal, the first in a 2-0 win, came just before half-time. The move started with Garry Parker, a classy midfielder who excelled under Brian Clough and Nottingham Forest and then Ron Atkinson at Aston Villa. As Parker received possession 40 yards from goal on the right wing, Heskey automatically moved into the channel. When Parker’s ball forward started to dip, Heskey improvised a balletic, backheel volley towards Claridge. The velvety touch was been impressive enough; the fact he produced it while in mid-air elevates it to the level of genius.

“I loved expressing myself,” said Heskey in his autobiography, Even Heskey Scored. “If I’d have done a back-flick like that at youth level, I’d have probably been dragged off the pitch, but Martin encouraged me to try things. I never wanted to do the simple thing at that age. I just loved the game and wanted to try all the tricks I could … Martin gave me everything; just relentless positivity.”

Heskey, 18, was emerging as one of England’s brightest talents. Football would become hard and often cruel, but in 1996 it was nothing but fun. “I was playing off instinct, without being too concerned about anything else.”

Just as Claridge’s run made Heskey’s mind up for him, so Heskey’s touch made up Claridge’s: it invited – demanded – a first-time volley, and Claridge obliged by lacing the ball almost nonchalantly past Raimond van der Gouw.

That insouciance shouldn’t obscure the quality of the finish – first the subtle adjustment of his feet, then the sweet timing and precise placement of the volley. “It’s never easy when the ball is coming across you,” says Claridge. “There’s very little room for manoeuvre. You only have a split-second, and if your timing isn’t right the ball will hit the front of your foot or the back of it.”

Claridge points out that there is another element to the goal. “As the ball was played forward, I peeled off my marker Chris Casper. That sort of anticipation got me a lot of goals. I wasn’t blessed with massive pace, I wasn’t 6ft4in, but what I did have was a knowledge of playing the game of football, so when the ball went forward I was on the move immediately because I knew where it would end up. Most goals come from the forward thinking quicker than the defender.” Scheming No 10s are not the only type of clever forward.

All three parts of the goal are excellent, and Heskey’s is astounding, but what really sets it apart is the synchronisation of the last two. It defied the laws of football probability. Most of the press reports described it in terms of cold excellence rather than awe, with only Jimmy Greaves, co-commentating on ITV, capturing its charm. “It’s a lovely goal this. Isn’t it a super goal?”

A great advert for putting grass in the sky

Leicester went on to win the match 2-0. Scholes sent a penalty so far over the bar that it hit the plate glass of a hospitality box and rebounded back to his feet. He volleyed it into the net, but because nobody else had touched the ball since he took the penalty, the goal did not count. Heskey then sealed the victory from close range following a corner.

Leicester went on to beat Ipswich, Wimbledon and Middlesbrough to win the competition. Then they did it again three years later. They also finished in the top half of the top flight for four consecutive seasons, the first time that had happened since 1930.

O’Neill and Leicester were respected and admired for their achievements; but at a time when teams were simplistically put into two categories – those who played good football and those who didn’t – Leicester were often disparaged as an east Midlands Crazy Gang. And while nobody is suggesting they were the second coming of France 1984, it was a bit more complicated than that. Claridge’s goal alone was a great advert for putting grass in the sky: from the moment Parker played the ball forward, it did not touch the ground until it rebounded off the back of the net.

Claridge says there is a simple reason why the goal was underappreciated. “It’s the particular club, isn’t it, and the way we were seen at the time. Martin O’Neill was given a reputation by people who didn’t have a clue about the game.”

For much of that season, Leicester’s midfield was Parker, Muzzy Izzet and Neil Lennon, three players who treated a football in a manner that would have pleased Swiss Toni. (Robbie Savage joined the following summer, though he was not encouraged to flirt with tiki-taka.)

“We had people who could play,” says Claridge. “Matt Elliott was a ball-playing centre-half. You get a tag from people who don’t know what they’re talking about. When someone writes about something you assume they know what they’re talking about; in football that’s simply not the case. ‘Leicester play a long-ball game.’ Nothing could have been further from the truth! But if someone says it enough times, the idiots believe it.”

English football was starting to succumb to the cultural cringe that has been a feature of the Premier League era, so a goal conceived by two scruffy, hard-working English forwards was always likely to suffer some unconscious prejudice. Claridge may not have helped himself with a low-key celebration. “It’s because it was reasonably early in the game,” he says. “With all due respect, you’re playing against Man United, so you don’t expect that to be the winner.”

Claridge ended 1996-97, at the age of 30 his first and only full season in the top flight, with 15 goals in all competitions. But when he lost his place the following season, he lost patience too quickly and moved, first to Portsmouth on loan and then permanently to Wolves.

When the dust settled it was clear he was a Leicester legend. He scored two of the most famous goals in the club’s history and also one of the best – a goal that had imagination, intelligence, teamwork, audacity and phenomenal skill. You really shouldn’t need a Pepsi Challenge to appreciate that.