‘I never heard anything from them’ – Matthijs de Ligt plays down Man Utd’s interest in him.

Matthijs de Ligt insists he was not in contact with Manchester United prior to his move from Ajax to Juventus.  De Ligt enjoyed a remarkab... 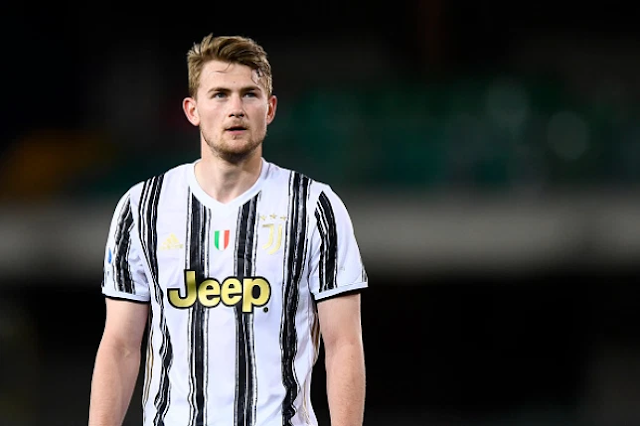 Matthijs de Ligt insists he was not in contact with Manchester United prior to his move from Ajax to Juventus.

De Ligt enjoyed a remarkable campaign with Ajax during the 2018-19 season, emerging as one of Europe’s brightest defensive talents as he helped his side reach the Champions League semi-finals while still a teenager. The centre-half was one of the most sought-after young players that summer, eventually signing a five-year deal with Juventus for a fee of €75million.

United were strongly linked with a move for the Netherlands international during those months before eventually signing Harry Maguire from Leicester City for a world record fee for a defender.

And in an interview with the Daily Telegraph however, de Ligt revealed there was never any concrete offer from Old Trafford, telling the newspaper: ‘Honestly, I never heard anything from them.’

21-year-old de Ligt is now playing alongside some of the most experienced names in European football in Gianluigi Buffon, Giorgio Chiellini, Leonardo Bonucci and Cristiano Ronaldo. The centre-half says he is turning to the club icons for inspiration as he continues to develop as a footballer but is out to become a superstar in his own right. ‘I’m where I want to be and where I can learn as much as possible,’ he said.

‘There are experienced guys – [Giorgio] Chiellini, [Leonardo] Bonucci – but also a goalkeeper like Buffon and Cristiano Ronaldo. ‘We all have our different characteristics and I do not try and copy them but I look at Ronaldo and see what he does, how he stays fit all the time. ‘I ask for tips, for advice. What I have also learnt is that I need to do things that are good for me. In the end you find your own rhythm.’