Jesse Lingard of England runs with the ball whilst under pressure from the San Marino defence (Photo by Eddie Keogh - The FA/The FA via Ge...

Jesse Lingard has hit some of the targets he has set for himself since his move to the London Stadium but the 28-year-old will not be happy until he can tick them all off.

Since arriving at West Ham Lingard's form has been sensational and his return to the England fold has seen the attacking-midfielder cross that ambition off his list.

Lingard has scored five goals in seven matches and added two assists in the claret and blue of West Ham. Proving that all he needed was an opportunity to showcase his talent, something that Ole Gunnar Solskjaer had denied him at Manchester United

"I feel sharp. Obviously, I have kept myself fit, mentally during lockdown it can be tough but obviously, at first, we did not know when we were going to be back playing football but in my mind, I just wanted to stay fit regardless anyway, to go back into [Manchester] United one of the fittest and sharpest and I did that," Lingard told BBC MOTDx.

"You have to believe in yourself and believe in your ability. It could have been quite easy to give up and fall off at the time because it was hard. You train all week and look to the game and then to not get picked of course for any player it is difficult."

Solskjaer made it clear to Lingard that he was not in his plans at Old Trafford with the England international going over 12 months without a Premier League appearance and reduced to just two cup starts all season.

Lingard knew he had to move on from the club he had first joined as a seven-year-old in 2000. After 21 years at the club man and boy, the decision to move away was a tough one but the joy Lingard gets from the game saw him desperate to get back playing.

"Even though it is our work it is our hobby as well. I've loved playing football from when I was young and I have a smile on my face, during the game and after the game, just to be back on the pitch doing what I do best, you can't beat that feeling," Lingard said.

David Moyes threw Lingard straight into action and his faith was instantly repaid with the midfielder scoring a brace on his debut and instantly becoming a key member of West Ham's attacking unit. Lingard's professionalism in keeping himself ready for action has paid dividends for club and country and the Hammer believes there is more to come.

"Since I came here I have had some targets written down on a board and until I hit them I won't be fulfilled," he said.

"[Playing for England] was one of the targets on my board, playing well, working hard, and showing why I deserve to be there.

"It would make a good comeback story [playing in Euro 2020] I can tell you that for a fact. The Euro's would be the icing on the cake for me... and getting into Europe [with West Ham] of course," he added.

Lingard was not only recalled to the England squad but was thrust straight back into the team by Gareth Southgate with the midfielder starting on the left against San Marino on Thursday evening's 5-0 victory. The level of opposition might have been low but the boss was impressed with the West Ham player nonetheless.

"I thought Jesse was excellent,” Southgate said. “First of all, really pleasing to see him playing football, enjoying his football, playing with a smile on his face.

“We know the qualities he has. We gave him his debut 50 games ago and why did we do that? Because he’s a player that technically is good, passes and moves, has intelligence in the positions he takes up.

“He works incredibly hard without the ball to pressure and to win the ball back. So, in the main, my first thought is how lovely to see him back playing at the level that we think he can be.” 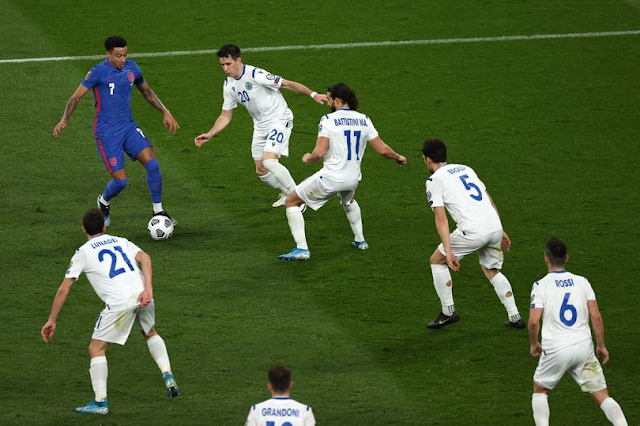