Manchester United have not reached a cup final in Ole Gunnar Solskjaer's time as manager of the club It is surely in the Manchester Un...

It is surely in the Manchester United manager's job description to win trophies, although even that did not sustain Louis van Gaal or Jose Mourinho when things turned bad.

While victories such as the one at Manchester City recently can lift the spirits and soothe the soul, Solskjaer cannot talk his way around what really matters forever. He needs to starting winning trophies sooner rather than later.

Leicester, even without the injured influential trio of James Maddison, Harvey Barnes and James Justin, were too good for United who managed to cook up the lethal combination of incompetence, lack of urgency and general carelessness to deadly effect.

Solskjaer decided this was the time to rest Bruno Fernandes and Luke Shaw, stellar performers recently, after the Europa League exertions against AC Milan but, to be brutal, this Manchester United side is not good enough to take chances or make wholesale changes against a team as good as Leicester City.

And how it showed in the shape of some utterly calamitous defending, summed up in various moments of madness that led to Leicester City's first goal after 24 minutes.

United captain Harry Maguire, who had a wretched 90 minutes under pressure from Kelechi Iheanacho and Jamie Vardy, played Fred into trouble with a pass near his own penalty area. The alarm bells should have already been ringing given Fred's awful start to the game (he did not get any better), which effectively rendered any pass in his direction a high-risk strategy.

The Brazilian, predictably, panicked and sent a perfect pass to Iheanacho, who gratefully accepted the gift to round Dean Henderson and score.

United also stood and admired the outstanding Youri Tielemans when he restored Leicester City's lead before a shambles of marking saw Scott McTominay get under a free-kick to leave an almost disbelieving Iheanach free to head in at the far post and confirm the win.

To describe the defending as clueless would be to do Manchester United a kindness.

As if to sum up the muddled thinking, Solksjaer introduced four substitutes in one hit after 64 minutes as Fernandes, Shaw, Edinson Cavani and McTominay came on for Paul Pogba, Alex Telles, Nemanja Matic and Donny van de Beek, whose dummy for Mason Greenwood's equaliser was a rare highlight in another anonymous display.

The biggest surprise of all was that Fred actually survived that revolving door moment.

United must now concentrate on the league - the Europa League. All the chips are on this as Solskjaer tries to win his first trophy as Manchester United manager.

While Solskjaer can certainly point to progress in the Premier League - although they are currently 14 points behind champions-elect Manchester City - a European trophy will certainly be most welcome and a quarter-final draw with Granada from Spain can be regarded as very favourable.

The big question is can the Manchester United team Solskjaer puts out when competitions reach the sharp end be trusted to get the job done? Not so far.

In contrast, Leicester City and manager Brendan Rodgers were understandably jubilant as they reached their first FA Cup semi-final in 39 years, when they lost 2-0 to Tottenham at Villa Park.

The Foxes face Southampton, who they beat 9-0 in the Premier League at St Mary's last season, for the chance to contest an FA Cup final for the first time since they lost 1-0 to Manchester City in 1969.

This was only their second win over Manchester United in 23 years, at the same time bringing Solskjaer's impressive run of 29 unbeaten away games in domestic competitions stretching back 14 months to a painful end.

Leicester were quicker, more direct and better organised in defence than United's chaotic, careless rearguard. The victory margin did not flatter this very fine side expertly coached by Rodgers.

As for United, there is still so much in this season for them - but they will have to be much better than this and prove they have what it takes to win in cup competitions when the pressure is on. 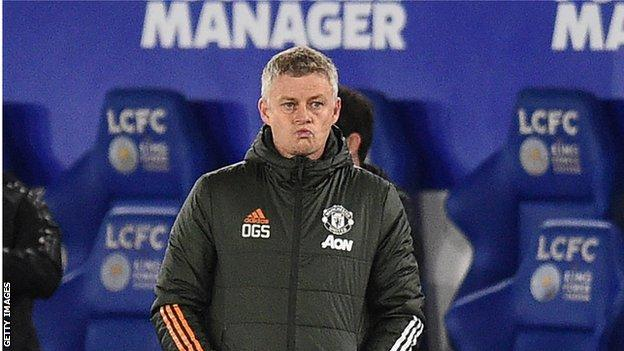