After welcoming back two players to their squad against Sheffield United, Leicester City will hope for more good fortune on the injury front as they prepare to host Manchester United in the FA Cup.

Jonny Evans and Ayoze Perez both made their comebacks against the Blades to provide a boost to manager Brendan Rodgers, who has had to cope without key players for great swathes of the campaign.

Here is the latest on the seven City players in, or just leaving, the treatment room.

Latest: Ricardo was substituted at half-time during City's victory over Sheffield United after feeling a tightness in his hamstring. His withdrawal was a precautionary one, rather than out of necessity, and the club will hope to have him fit for the weekend's game.

Latest: After two months out, the Belgian very nearly made his return to the squad against Sheffield United, but just "didn't quite make it", according to his manager. After another week's training he is expected to make his comeback against United, having last played in the third round of the FA Cup on the first weekend of January.

Latest: There's no set timescale for Maddison's return from a recurrence of the hip problem he suffered last summer. He does not need an operation, but he does need the pain to subside. Rodgers has said it is more than likely he will be out until after the international break, but did not rule out a comeback against United.

Latest: Under picked up a thigh injury in training just before the win over Brighton, and is expected to be out until after the international break.

Latest: The injury that has hampered the skipper for a few years has kept him out for a couple of months now, with no set date for a return to training.

Latest: He underwent an operation two weeks ago after a "part of the patella separated in the knee". He was diagnosed with a six-week lay-off following the injury, which leads up to the home game against his former loan club West Brom on April 17.

Latest: The full-back has undergone surgery on an ACL injury. His recovery will be a long one, and he is not expected to be close to a return until November. 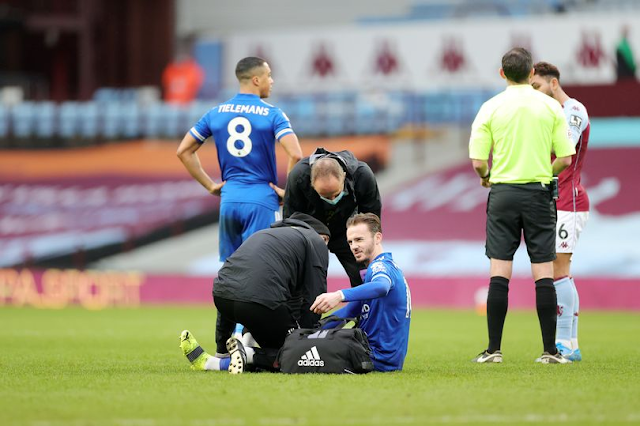